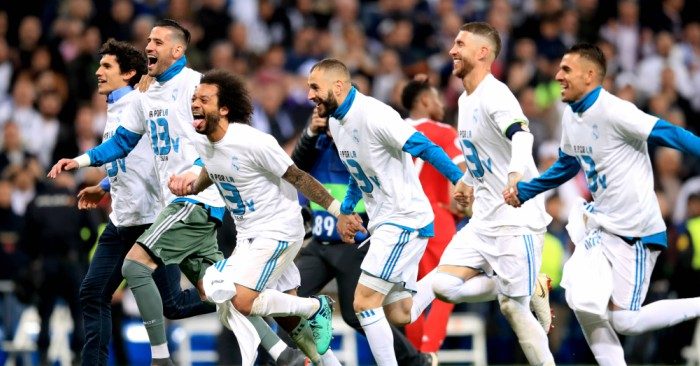 It’s been lovely, it really has. There were all those goals in the knock-out stages, the stroll against Porto, the astonishing victory over Manchester City and then the first leg against Roma at Anfield, which witnessed a wonderful display of dynamic, attacking football. Barring total disaster, Liverpool will reach the Champions League final above and beyond all expectations. It has been truly lovely, but it will end in disappointment. For this Real Madrid side has God, Lady Luck, the tooth fairy, Santa Claus and the devil in their corner.

For all but a few seconds of the 180 minutes of this Champions League semi-final, Real Madrid were outclassed. The final shot totals were 39-16 but that barely begins to describe the level of fortune enjoyed by Zinedine Zidane’s side in this tie. We credited the Frenchman for his game management in the first leg but we will give him no such compliments after those torrid 90 minutes in the Bernabeu. He could have drawn the Madrid players’ names out of the hat like the final day of a Sunday league season and this blessed Real would still have progressed…just as long as Keylor Navas was still the one wearing the gloves.

Zidane had got his original selection wrong in Munich but corrected his mistake; in Madrid he got it wrong and persisted with the error for 72 minutes. It was almost like he was seeing just how far he could test the theory that this Madrid side is simply destined to win a third successive Champions League trophy. Why would you need your best defensive midfielder in a game in which it is thought vital that you do not concede two goals? Why would you pick an actual right-back against one of the game’s greatest wingers? Why bother with tactics at all when fate has already decided everything?

If Rafinha aided Real Madrid in Munich, Sven Ulreich aided, abetted and served time in Madrid with a mistake that launched a thousand million gifs. Coming on the back of a clear handball from Marcelo, you suspected that this would be Real Madrid’s day, year, decade. They could afford to look defensively porous, they could afford to be dominated in midfield, they could afford for the greatest goalscorer in Champions League history to be a virtual passenger.

“Madrid are not unbeatable, some day another team will win the Champions League,” said Sergio Ramos this week and those are not the words of a man who expects that ‘some day’ to come any time soon. After coming through the toughest possible knock-out draw with victories against PSG and Juventus and half a victory over Bayern, Ramos absolutely believed that the trophy was their destiny. And if he believed it then, he sure will believe it now, after surviving an onslaught by hook, crook and some awful finishing from the currently leaden Robert Lewandowski.

Madrid have not always been a team who know how to suffer and win, but this really quite ordinary Madrid have had to learn all kinds of new tricks. The La Liga table is a clear illustration of their limitations, but this Champions League charge has showcased both their brilliance and resilience. Oh and the value of making a deal with any figure worthy of a prayer, a sacrifice or a letter to Lapland.