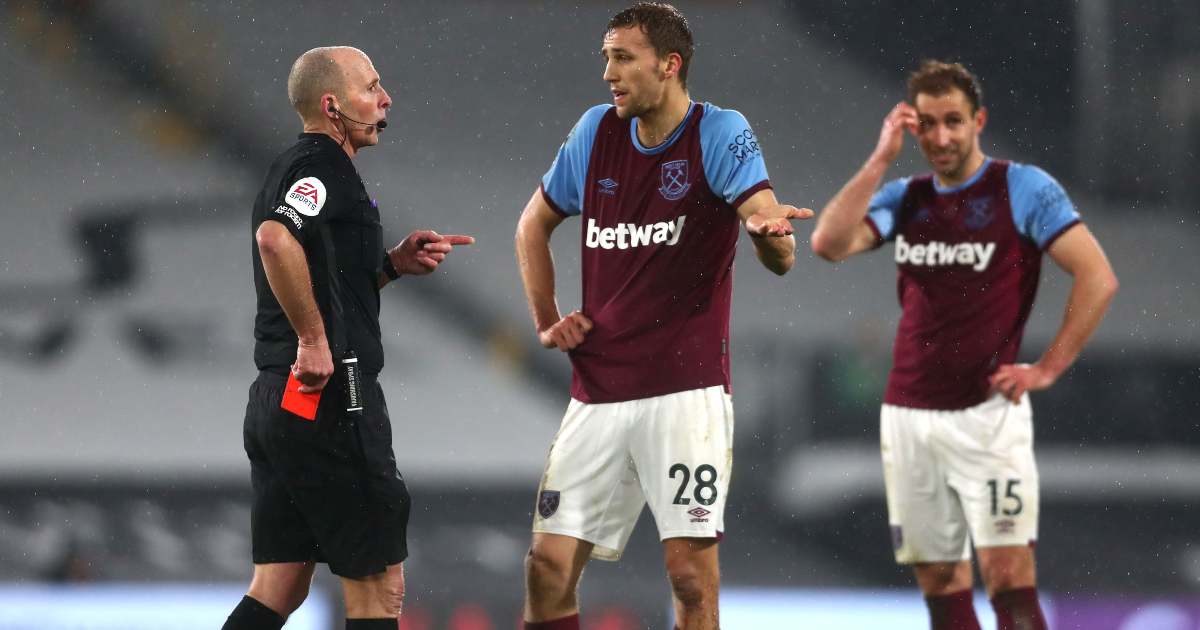 David Moyes said he was “embarrassed” for referee Mike Dean over his decision to award Tomas Soucek a red card in stoppage time as West Ham were held to a goalless draw at Fulham.

The Hammers were reduced to 10 men when the towering midfielder was dismissed in added time – following an extensive VAR review – for putting his elbow in Aleksandar Mitrovic’s face.

Referee Dean consulted the pitchside monitor, after being invited to do so by VAR official Lee Mason, having initially waved play on.

The pair were also involved in another controversial decision earlier this week, when Dean sent off Southampton’s Jan Bednarek during a 9-0 defeat by Manchester United, with the club launching a successful appeal that saw the red card rescinded.

“No, because I think both are good referees and have been throughout their careers,” Moyes said when asked if the refereeing duo should work together.

“That worries me even more that they’ve made that decision tonight. I’m amazed they’ve even sent them to look at it.

“Even more amazed that Mike chose to do something with it. What can we do? I don’t think anyone in football or football management are convinced by the rulings we’re involved in.”

Moyes said he did not ask Dean to explain himself, adding: “I’m actually quite embarrassed for Mike that he would have made that decision.”

Moyes said that Mitrovic had gone up to tell Dean it was accidental and criticised the decision further.

“(It was) an accidental coming together which, to show a red card I think was an embarrassing decision. I’m more embarrassed that it would happen and VAR would go and ask him to look at it because I thought it was just a simple accident which should have just said get on with the game and nothing more.”

Jamie Redknapp and Bobby Zamora are shocked by the officials' decision to send off West Ham's Tomas Soucek against Fulham. pic.twitter.com/3h4VQprv9T

Fulham manager Scott Parker said the game is going “very sterile” and that the same decision would not have been upheld when he was a player.

“I’ve not really seen it. It looked a little bit harsh but the way the game is going it’s become very, very sterile hasn’t it? In this modern day or the game we’re now involved in, it’s probably a sending-off.

“It’s certainly not one that would have been five years ago and it’s probably where Mike Dean was looking at it from. He’s been refereeing for a long time and probably looks at it and thinks, ‘this is a contact sport’ but it looked harsh.

“That (the sterile game) is the game it seems that everyone wants.

“It seems like we want to slow things down on TV. I think sooner or later there’s no use in wearing shin pads, I think we’re only a matter of time away from that with lack of contact in a sport.”