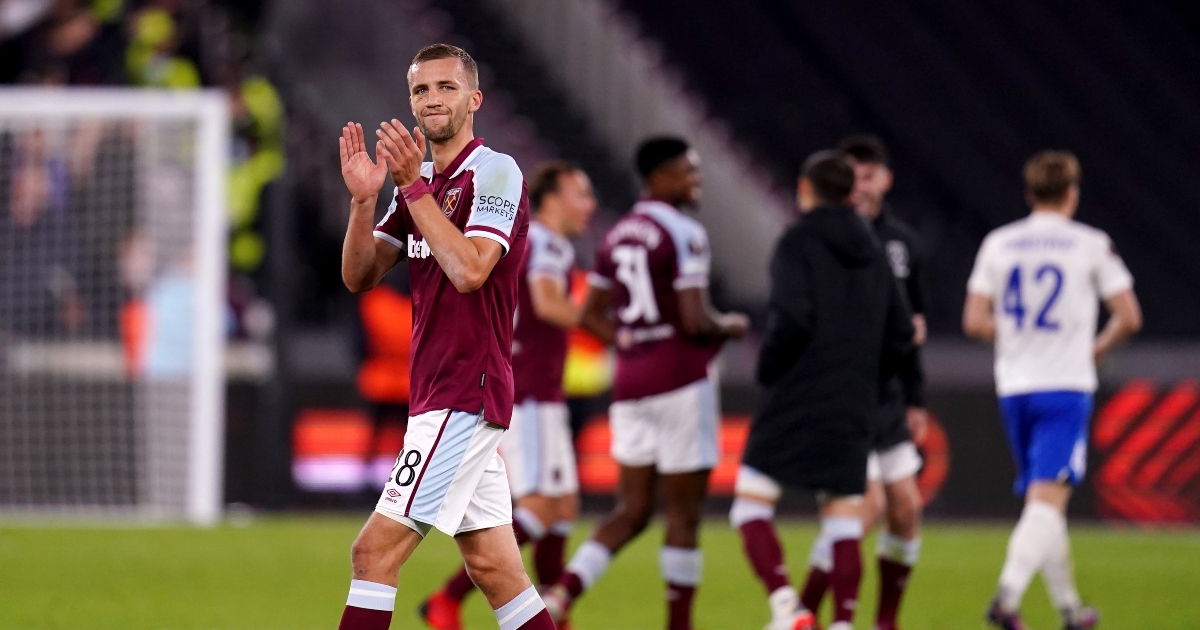 West Ham midfielder Tomas Soucek has revealed that the Hammers are looking to go as far as they can in this season Europa League after an impressive start.

The Hammers have begun their maiden Europa League group stage campaign with three wins from their opening three matches.

Thursday night’s 3-0 victory over Genk left them six points clear at the top of Group H and means they could even secure qualification for the knockout stages in the return fixture in Belgium in a fortnight, with two games to spare.

Soucek played the full 90 minutes for the east-London outfit on Thursday evening despite suffering facial injuries in the clash with Everton on Sunday.

The ex-Slavia Prague midfielder Soucek is one of the few West Ham players with European experience and he knows the job is not done yet.

But David Moyes’ side are in a buoyant mood ahead of Sunday’s derby showdown with Tottenham at the London Stadium.

Soucek said: “Three wins in three games is very good but I remember how hard it is from my former team. For us it’s big to be first and it’s not easy.

“We have had three very difficult opponents and it’s still half-time. It’s only three games and in the second three games we have to keep going in the same way.

“I hope we go as far as possible, because every competition I start I want to finish first. Also in the Premier League or the FA Cup or the EFL Cup.

“I want to do the maximum in every competition I play. We are only at the start. We want to be successful in each competition.

“West Ham didn’t play for a long time in this competition and now we have the chance to play in it we want to be successful.”

Soucek was delighted to see striker Jarrod Bowen chip in with his first European goal after headers from defenders Craig Dawson and Issa Diop put the Hammers 2-0 up.

“Jarrod is an important player for us because of the role he plays,” added Soucek. “I’m happy he scored because it’s important for his confidence.”