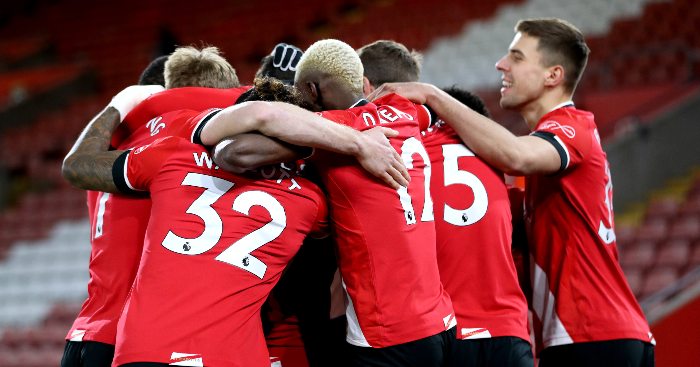 Danny Ings netted the only goal of the game against his former club as Southampton picked up a brilliant victory over Liverpool at St Mary’s.

There were less than two minutes on the clock when Ings lobbed goalkeeper Alisson to give Saints the lead, their first goal since December 16.

The Reds have struggled for form since their 7-0 thrashing of Crystal Palace on December 19, with draws at home to West Brom and at Newcastle falling before this defeat in Hampshire.

Although the champions hold on to the Premier League top spot on goal difference, Jurgen Klopp’s men failed to take the opportunity to go three points clear of rivals Manchester United, who now have a game in hand over the champions.

For Saints it was their first win since a 3-0 victory over struggling Sheffield United on December 13, and the first time under Ralph Hasenhuttl they had taken points off Liverpool, having lost their previous six meetings between the two teams.

It clearly meant a lot to the Austrian, who appeared to be in tears shortly after the final whistle had gone.

His team had been given the perfect start after Thiago Alcantara gave away an early free-kick on his return to the starting line-up. James Ward-Prowse found Ings with a clever free-kick and the 28-year-old took a touch before expertly lobbing into the far corner.

The striker benefited after a lapse in concentration from the usually reliable Trent Alexander-Arnold in a makeshift Liverpool defence, with Klopp naming his 10th centre-back pairing in 17 top-flight matches this season.

It took until the 33rd minute for Liverpool to create their first significant chance of the game, when Sadio Mane cut in and curled the ball towards goal, but his effort was over the bar.

Liverpool looked to put the pressure on the home side after the goal, with Mohamed Salah finding space in and around the penalty box.

But despite having 62 per cent of the possession in he first half, the visitors were unable to convert it into clear-cut chances and often resorted to long, probing balls over the top from defence.

They did have a penalty shout in the second half when Georginio Wijnaldum’s shot hit Jack Stephens’ arm. VAR took a look but did not overrule the referee’s onfield decision, and the game was allowed to continue.

Sadio Mane also went down in the area just before the hour mark, under the challenge of Kyle Walker-Peters – but again Andre Marriner waved play on and VAR did not take a second look at the incident.

Despite their pressure, Liverpool’s first shot on target came in the 75th minute when Mane found himself in space inside the area, but his shot lacked power and Fraser Forster, making his first appearance since December 2017 because regular stopper Alex McCarthy tested positive for coronavirus, was able to gather.

Alisson was given a late reprieve when Southampton almost doubled their lead after coming 30 yards to clear the ball, only for substitute Yan Valery to get there first – but makeshift centre-back Henderson was able to get back and clear the ball.