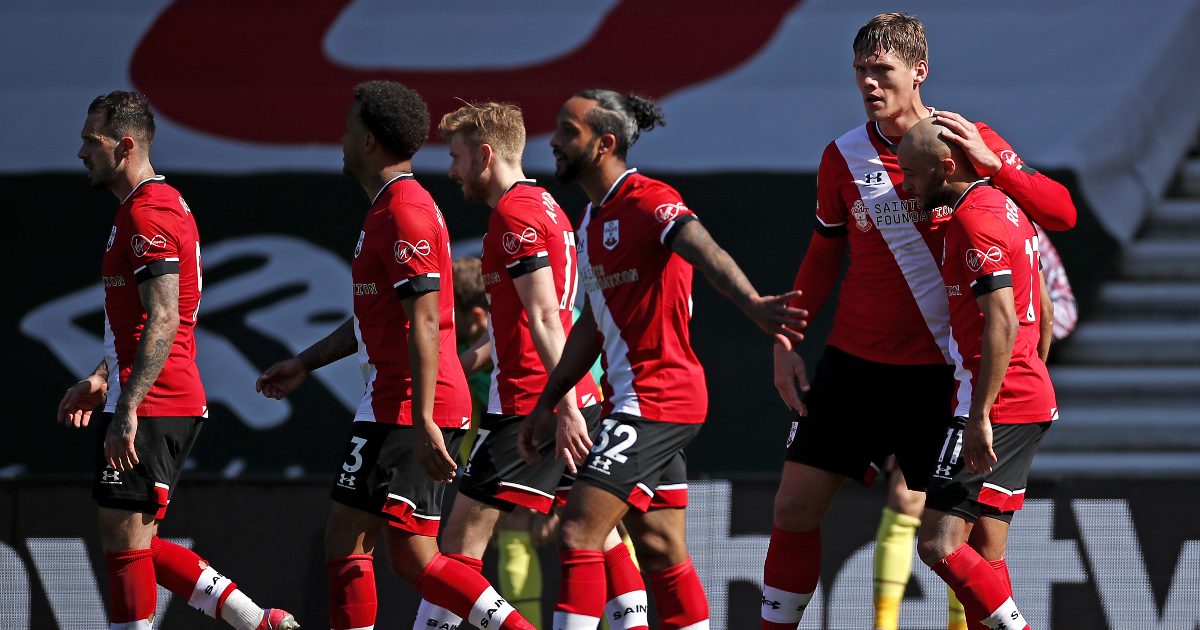 Nathan Redmond fired in the winning goal for Southampton after they trailed 2-0 to Burnley in the first half.

Striker Ings, back after a month-long absence due to a leg issue, was involved in all three Saints goals to inspire the hosts to a first home league success in three months.

Nathan Redmond volleyed home the second-half winner after Ings had sparked the dramatic turnaround by setting up Stuart Armstrong’s goal and then equalising before the break with a fine individual effort.

OPINION: Haaland a no-go? Danny Ings is a no-brainer

Sean Dyche’s Clarets were seemingly in complete control with just half an hour gone at St Mary’s courtesy of Chris Wood’s penalty and a powerful finish from Matej Vydra.

Aside from reaching an FA Cup semi-final, Hasenhuttl’s men have endured a torrid 2021, suffering 10 defeats from 12 league outings prior to kick-off.

Victory moves them above Wolves and into 13th place, three points clear of the Clarets.

The teams began the day locked on 33 points – seven above the drop zone – and seeking to banish any lingering relegation doubts.

Saints were buoyed by the returns of Ings and Theo Walcott from injuries, while Burnley stuck with the starting XI which won at Everton three weeks ago.

Despite their double selection boost, Saints were forced back for much of the opening stages and fell behind to a 12th-minute penalty awarded following VAR intervention.

Play initially continued after Kyle Walker-Peters’ lunging challenge left Erik Pieters crumpled on the turf before referee Andre Marriner watched the incident on a pitch-side monitor and pointed to the spot.

Clarets striker Wood, who had forced Saints goalkeeper Fraser Forster to a save inside 40 seconds, eventually despatched the kick four minutes after the foul, confidently drilling down the centre of the goal.

The opener was just reward for the visitors’ bright start and made Wood Burnley’s joint record Premier League scorer, level on 41 goals with Ashley Barnes.

Southampton were struggling to threaten and their task became more difficult just 28 minutes in.

Wood turned provider this time, beating Jan Bednarek in the air to Ben Mee’s long ball forward and allowing the unmarked Vydra to lash home past Saints goalkeeper Forster from the edge of the box.

Clarets boss Dyche would have been content to take the pace out of an open contest but his side had little time to settle on their two-goal lead as Saints halved the deficit just three minutes later.

A deft touch from Ings flicked James Ward-Prowse’s pass into the path of Armstrong and he rifled the ball into the bottom right corner from just inside the D.

A helter-skelter first half took another twist just four minutes before the break as Ings marked his return in style.

The former Burnley man seized on a mistake from Mee to race on to Walker-Peters’ hopeful ball forward and then calmly cut inside James Tarkowski to slot between the legs of England keeper Nick Pope.

Southampton were far from satisfied to settle for a draw and the breathless tempo continued after the restart.

Ward-Prowse almost completed the turnaround when his shot took a slight deflection and cannoned back off the underside of the crossbar.

A brief blast of Song 2 by Blur suggested at least one person in the ground thought the ball had crossed the line, before Pope then denied Armstrong and Walcott in quick succession.

Pope soon gave another reminder of why he is almost certain to be in Gareth Southgate’s squad for the European Championships, prior to being powerless to prevent Saints edging ahead.

The 28-year-old superbly repelled Ings’ stinging drive but the alert Walcott latched on to the rebound to lift the ball across goal for Redmond to smash home.

Southampton were forced to survive some nervy moments in the closing stages and Forster twice denied Wood an equaliser, including a sensational close-range save from a diving header.

Saints substitute Che Adams – on in place of Ings – could also have wrapped up the win in added time but fired wide when through on goal.

The miss mattered little in the end as Saints held on to complete a first league double over Burnley since the 1970-71 season.