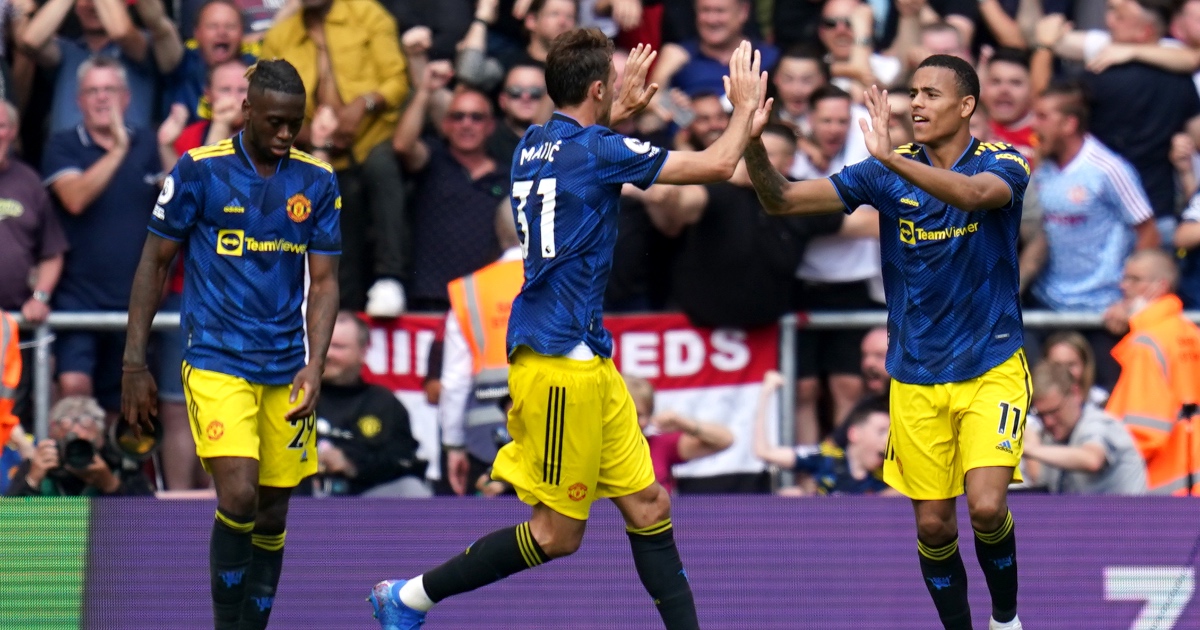 The first match in front of a full St Mary’s crowd in almost 18 months also saw these sides do battle for the first time since Ralph Hasenhuttl’s men conceded nine without reply at Old Trafford in February.

There was no further humiliation on Sunday as Saints put in a promising performance, taking the lead when Che Adams’ strike deflected in off Fred before Greenwood secured a 1-1 draw and United’s place in the history books.

Solskjaer’s side went the whole of last season without losing a league game on the road and this result on the south coast took their unbeaten league away run to 27 matches, putting them level with Arsenal in 2003/04.

Saints threatened to stop that run on Sunday and went into half-time ahead, having stood firm during a strong start by the visitors before Adams ended a fine team move with a strike from the edge of the box that went in off Fred.

Bruno Fernandes was furious that Jack Stephens was not punished for a foul in the build-up, but his mood improved 10 minutes into the second half when Greenwood struck through a crowd.

United tapered off after a strong start to the second period, with summer signing Adam Armstrong having a couple of chances to fire Saints to a first home win against United since 2003.

James Ward-Prowse had the first effort of the game when forcing David De Gea into action with a long-range free-kick, but United settled and somehow failed to score seven minutes in.

Greenwood dragged wide from distance and Salisu blocked a Pogba strike as the visitors continued strongly, with the France midfielder then heading over a Luke Shaw free-kick.

Southampton were angered by a break in play after Moussa Djenepo accidentally caught Greenwood in the face, but it worked in their favour as it allowed them to regather their thoughts.

Armstrong bent over from the edge of the box following some Djenepo stepovers, with St Mary’s erupting in the 30th minute.

Fernandes was furious having felt he was fouled on the right by Stephens, who left the Portuguese in a heap and continued to fizz across to Djenepo. The winger’s first-time ball was smartly flicked on by Armstrong to Adams, who took a couple of touches and struck home from 20 yards via a deflection off Fred.

Fernandes was booked for his remonstrations with the officials after the goal and Saints threatened a second, with Livramento superbly bursting down the right only to just overhit a cross.

Alex McCarthy denied a close-range Nemanja Matic header shortly before half-time, which started with Southampton apologising to supporters and promising refunds after thousands of fans’ entry was delayed.

Jan Bednarek came on for Theo Walcott at the break as Saints went to a three-man backline, which was holding its breath when United appealed for handball after a Pogba effort struck Salisu.

Armstrong sent over a smart cross and Livramento lashed over at the other end, before United levelled in the 55th minute.

Pogba poked a Fernandes ball on to Greenwood, whose shot beat McCarthy and found the back of the net in front of the raucous travelling support.

Jadon Sancho replaced Anthony Martial and Pogba was soon leading the Southampton defence a merry dance before hitting a left-footed shot just across the face of goal.

Greenwood headed onto the roof of the net and McCarthy produced an unorthodox save to deny a Fernandes header.

Until that point De Gea had precious little to do but came to the rescue in the 73rd minute. Pressing Ward-Prowse took the ball off Maguire and Adams threaded through Armstrong to get a shot on goal.

The Saints new boy wasted a great chance shortly after when Adams glanced on a corner to him at the far post, but he failed to get a telling touch on it.

De Gea punched a Ward-Prowse free-kick clear as Saints ended the match on top to earn a deserved point.