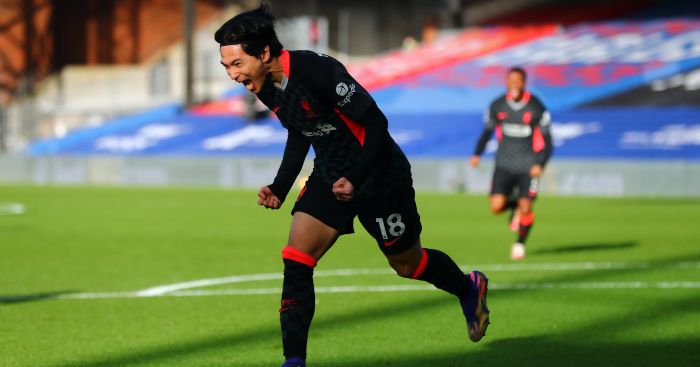 Southampton are attempting a late deal to bring Takumi Minamino to St Mary’s from Liverpool, according to reports.

Minamino joined Liverpool in January 2020 from RB Salzburg after the Reds activated his £7.25m release clause.

Given the impressive form of Mo Salah, Roberto Firmino and Sadio Mane, Minamino has found it difficult to earn himself a sustained run in Liverpool’s first team.

Xherdan Shaqiri and Divock Origi both started ahead of him in the Reds’ 3-1 win over West Ham at the weekend and the Japan international has only started two Premier League matches this campaign.

And now The Athletic journalist David Ornstein claims that Southampton are ‘working on sensational 11th-hour deal to sign’ Minamino from Liverpool.

The Saints want him ‘on loan for the rest of the season’ with talks ‘advanced but not done’ and there is an ‘excitement’ at Southampton at the possibility of bringing Minamino to St Mary’s.

🚨 EXCLUSIVE: Southampton are working on sensational 11th-hour deal to sign Takumi Minamino on loan from Liverpool. Advanced but not done. Excitement at #SaintsFC about possibility of getting 26yo Japan attacking midfielder @TheAthleticUK #LFC #DeadlineDay https://t.co/aCrt7fml1n

Speaking in December on his start at Liverpool, Minamino said: “A lot of people, including the manager and the staff, supported me. Thanks to them, I managed to live my life during the lockdown.

“Although it was a difficult time, a lot of people supported me, and in this sense, I think Liverpool Football Club have a wonderful team of people.

“I am looking forward to [the festive period] very much. Because there are two games in a week. I will have more chances to play games and I am happy about it.

“We suffer a lot of injuries now, so a player like me needs to work harder for the team. I would like to prepare myself well and achieve a result if I am given a chance.”