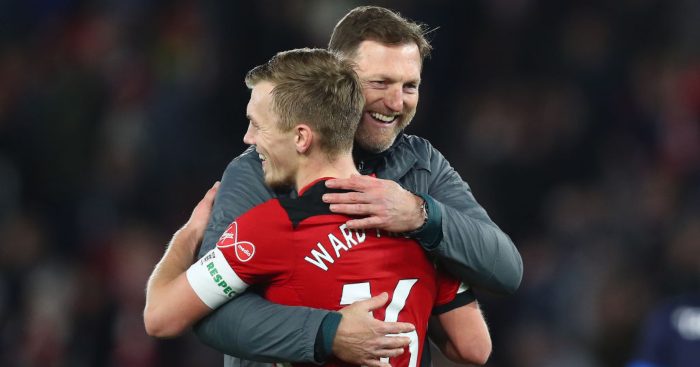 Southampton boss Ralph Hasenhuttl is optimistic James Ward-Prowse will overcome a nasty leg injury to face Burnley but is eager to avoid exacerbating the problem.

Saints midfielder Ward-Prowse returned to training on Thursday after being left in agony by a deep gash suffered during last week’s FA Cup fourth-round replay defeat to Tottenham.

“Today was his first time on the pitch. I tried to keep him out as long as possible. The players always like to come back on to the pitch and he handled it well, I think,” said Hasenhuttl, ahead of Saturday’s game with the Clarets.

“We must pay attention that the cut is not going to open again but it looks good and hopefully he can play on the weekend.

“It’s more important that it doesn’t get worse and then he’s out. We must pay attention, if it’s too early then we don’t play with him. But it looks good.”

Ward-Prowse has been forced to fill in at right-back in recent weeks, but should return to a more natural position in midfield following the arrival of Kyle Walker-Peters.

Walker-Peters, who joined on loan from Spurs late last month, is set for his Saints debut this weekend and Hasenhuttl is confident the new signing is up to speed following limited action for his parent club.

“I think so, (he has) trained now for a few weeks with us and showed that he can help us,” said Hasenhuttl.

“I think (he has) learnt our habits and our behaviours – I think that’s important for him. This is another good option I have.”