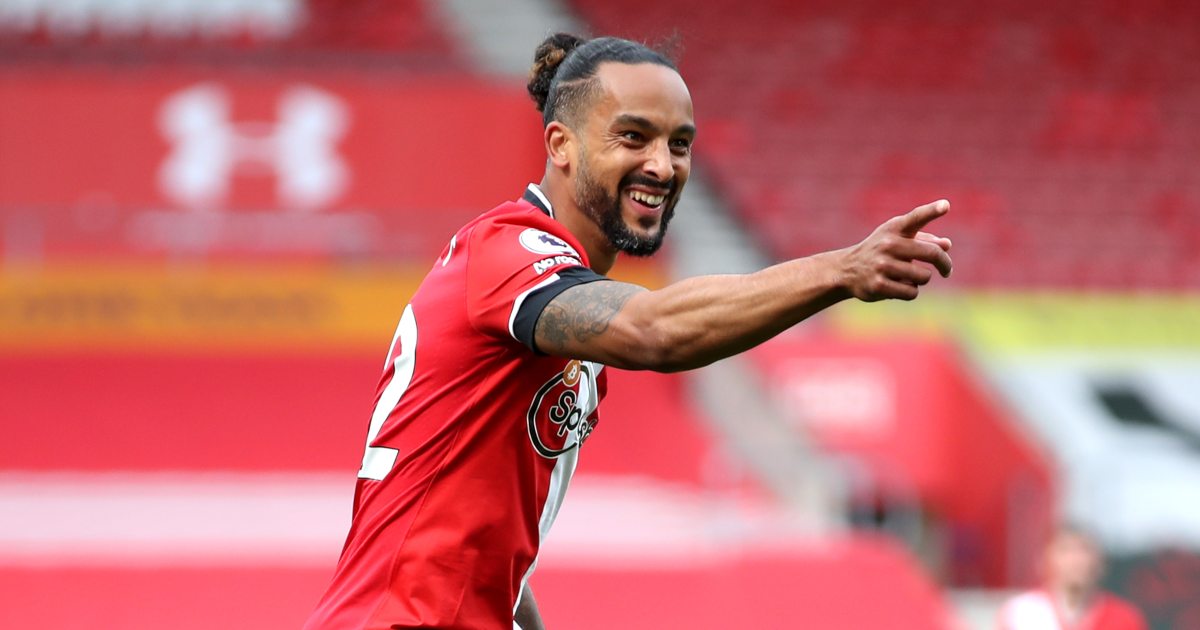 Southampton have confirmed that 32-year-old academy graduate Theo Walcott will re-join the club on a two-year deal when his Everton contract expires in June.

Walcott rattled home his third league goal of the season against relegated Fulham on Saturday. Not a particularly impressive feat in itself, but the context of the goal was massive. Nathan Tella, formerly of Arsenal’s academy, played a delicate ball through for Walcott to smash it home after scoring his first senior goal in the same game.

The sight of Tella and Walcott celebrating together was symbolic – the old and the new combining on the pitch, the obvious Arsenal connection too. This has been a difficult year for the Saints, who have seen their season drop off a cliff after some good early form. If you squint at the table, they might secure a mid-table finish that is just about satisfactory.

Saints manager Ralph Hasenhüttl was effusive in his praise for Walcott this week: “Theo has been a very good influence for us this season. He is a very professional player who does things in the right way and has a very positive impact not only on our young players but on the dressing room as a whole.”

Theo Walcott being an all-round good egg isn’t particularly earth-shattering news, but it’s certainly reassuring for Saints fans to know they’ve got a much-needed senior voice in the dressing room. The fortunes of the south coast club – including the annual 9-0 drubbing – can often be the fault of inexperience in key areas.

With the lack of depth in certain areas – particularly in central midfield and full-back – there has been an increasing reliance on handing academy players debuts and minutes in the top flight. Hasenhüttl has used eight players aged 21 and under in the Premier League, with six of them making their league debuts this season.

With a squad of an average age of 27.5 years, the Saints have fielded the seventh oldest in the division. This is largely skewed by the handful of senior professionals in the squad, with a combined 86 appearances for players between 31 and 34 years old this season. The oldest player to make an appearance, Shane Long, has been on loan with AFC Bournemouth since February.

Age aside, it’s clear that Southampton have had to make do with a very small squad in a particularly turbulent league campaign. Only West Bromwich Albion have used more players in the Premier League this year than Southampton, who have used 29. This perversely reflects the thin squad and the number of debuts handed to those young players getting game time amidst injuries; Walcott himself was sidelined for several months in the middle of the season.

Walcott’s quite conservative goal tally has still helped the Saints to safety this season. His other two league goals earned them vital away points at Wolves and Arsenal, with his three assists securing two wins and a point away at Chelsea. His impact has been decisive, if a little sporadic.

Good to see that ‘didn’t quite live up to his promise’ Theo Walcott is still scoring Premier League goals aged 32, to add to his ‘never quite did it’ 47 England gaps and ‘unfulfilled’ 386 Premier League appearances.

The former Arsenal and England man is versatile, too. No, it’s not 2009 and no one is under the illusion that Walcott could be England’s solution in the number 9 role, but Hasenhüttl has previously praised his adaptability, work-rate and willingness to learn new positions and systems. He’s been fielded as one of the two ‘10s’ on either side for most of his loan spell, but has found himself used up front on a few occasions.

One of these instances saw Walcott partnering striker Che Adams when the Saints beat Newcastle 2-0 in November to go top of the Premier League, albeit for a day. The Austrian was impressed with the pair, who played up front in place of Danny Ings. “I like the way they worked together. Against the ball is massive the work they have to do there.” Walcott’s contribution without the ball is perhaps one of the reasons Southampton are only second in the league behind Liverpool for ball recoveries this season.

Walcott can inspire this next generation of Saints with his professionalism, his quality and his work-rate. At 32, he still possesses an undying energy and an ability to be effective in a variety of positions. These are both incredibly important to the rigorously tactical Hasenhüttl and, with a full pre-season, perhaps his physical condition can be managed better in the next campaign.

With Ryan Bertrand departing this summer, Saints have freed up some wages and they’re certainly keen to retain someone of Walcott’s experience. Financial uncertainty looms over Southampton with COVID-19 and their mysterious Chinese backing, but signing an out-of-contract Theo Walcott looks pretty shrewd business in what simply must be a busy summer.