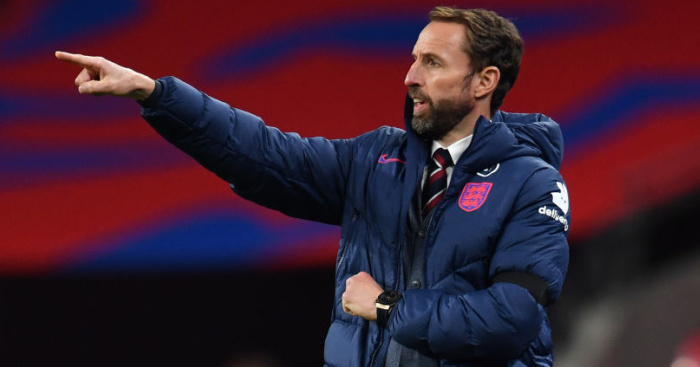 England boss Gareth Southgate praised the efforts of his experimental side, while Conor Coady and Dominic Calvert-Lewin both overflowed with joy after notching their first senior England goals.

The Three Lions ran out comfortable 3-0 winners over Wales at Wembley.

All three goals were the first senior international goals notched by scorers Dominic Calvert-Lewin, Conor Coady and Danny Ings. That unique feat was the first time it had occurred for three England players in the same match since 1963.

Speaking to ITV following the match, Southgate said: “I thought the players did very well. It’s so difficult for almost a completely new team to come together with not a lot of experience around it.

“I thought they coped with that very well.

“It wasn’t fluid at the start but the longer the game wore on, they got more and more into the game, they solved the tactical problem that Wales posed us when they were pressing and I thought we finished very strong.”

See how all the action unfolded via the Football365 score centre here.

Reflecting on transferring his remarkable form with Everton to the international stage, Calvert-Lewin said: “Absolutely [a dream debut]. It’s a shame there are no fans here to celebrate and my family aren’t here, it’s bittersweet in that sense but to score on my debut it’s the stuff of dreams.

“I’ve worked very hard to get here, it’s felt like a long road but I’m very happy to be here and to get the opportunity and the goal.”

On the provider of his first senior international goal Jack Grealish, he added: “He’s a top player, I’ve seen it already. He has bags of ability and I knew if he got in that position he would get the cross in [for my goal].

On potentially getting more minutes in England’s upcoming fixtures: “I dont know what [going off early] suggests but I enjoyed the time I had on the pitch and I’m ready to step in when needed.”

Wolves centre-half Coady was the third player to score their first senior England goal on the night.

“I’m still in shock to be honest,” said Coady. “It’ll live with me forever. It’s an amazing night for me. It’s just an incredible night honestly.

“I can’t explain it. To play with these players is incredible for me, the feeling of it and everything about playing at Wembley for England – I’ll never forget it.

“You want to come and impress, everyone does, but I want to help whenever I’m called upon. I will make sure I’m ready and I’ll give 110% every time I play for my country.”