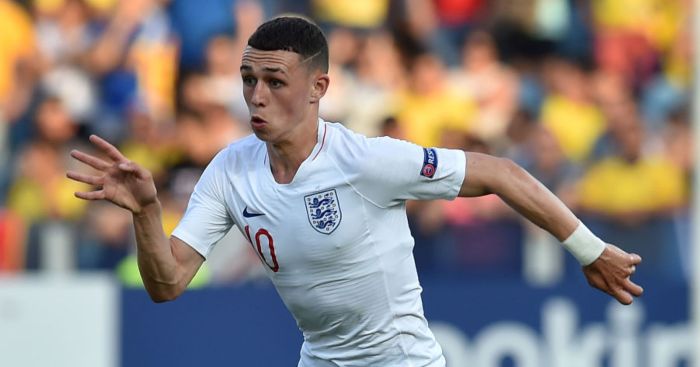 England manager Gareth Southgate does not believe Phil Foden needs to leave Manchester City on loan in order to continue his development.

The 19-year-old was described as the “most talented player I’ve ever seen” by City boss Pep Guardiola in the summer, but is struggling to break into a star-studded side at the Etihad Stadium.

He has played just 102 minutes this season – with 90 of those coming in a Carabao Cup game at Preston – meaning Southgate has overlooked him for his latest Three Lions squad this week. And the media reacted predictably.

As the season kicks into full swing, with City competing on four fronts, Southgate expects Foden’s game time to increase and has warned of the possible pitfalls of leaving on loan.

“So I’m sure in the coming months that game time will increase as the number of matches racks up.

“I think you should always assess those things halfway through the season and towards the end of the season to see how much football they’ve got, and then I’m sure they’ll make a decision on what’s right for him as a player.

“It isn’t always as straightforward as to go on loan because that is fraught with some difficulties as well at times with the style of play, different training regime, everything around him.

“But I know those discussions will be going on at Manchester City at the top.”

Southgate’s latest squad is packed with youngsters as Chelsea defender Fikayo Tomori has earned a maiden call and is joined by his team-mate Tammy Abraham.

Those two are getting regular action at Stamford Bridge under Frank Lampard and are getting the experiences to prime them for international football.

Given Foden’s tender age and the players he is competing with for a shirt at City, Southgate is prepared to be patient with him – and thinks others should be too.

“It’s a little bit harder to get in the side at those bigger clubs, but when you’re in, as the Chelsea boys are now, there’s a great opportunity to play important matches, (gain) big-match experience,” Southgate added.

“So, I’d probably try to calm Phil’s situation, because there’s a lot of expectation around him and I think that’s a huge pressure for a young player potentially.

“At the moment, a lot of his game has been forged with our junior team.

“That’s how he’s appeared on the scene, so we’re really happy with his progress.

“His mentality when playing with the under-21s in the last match was great. He needs those matches.

“He needs that stamina and that game time, and we think it’s right to put him on.”