Home All The News Southgate: England never made any guarantees to Rice 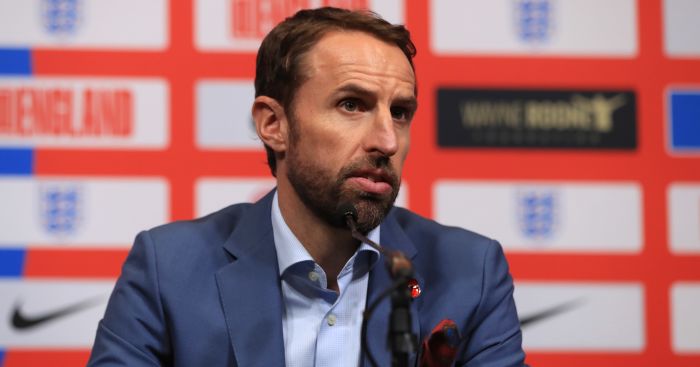 Gareth Southgate insists Declan Rice’s club form warranted his first England call-up – but has made no guarantees to the West Ham midfielder after he switched international allegiances.

Rice was the only new face in the Three Lions squad for this month’s Euro 2020 qualifiers, just a week on from gaining FIFA clearance to represent England as opposed to the Republic of Ireland.

England kick off Group A against the Czech Republic at Wembley next Friday before heading to Podgorica to take on Montenegro.

Southgate has named a 25-man squad for the double-header, with West Ham midfielder Rice, as expected, the headline inclusion.

The 20-year-old appeared for the Republic of Ireland’s youth teams and won three senior caps, but FIFA last week ratified his switch to England as those three appearances came in friendlies.

Southgate has been a long-term admirer of Rice, who on Tuesday was named Ireland’s Young Player of the Year, and is looking forward to welcoming him into the fold – but stopped short of making future promises.

“Well, his form warrants it,” the England boss replied when asked about Rice’s inclusion.

“It’s obviously been a well-publicised situation with Declan. We’ve tracked him for quite a while. I think they are really big decisions when you are asking a player to transfers associations.

“You have to be very clear that you feel they have a future with you. That said, there were never any guarantees made to him. Because I think that was also important.

“You’ve got to be playing well to get in the squad. But his form has been excellent, we like what we’ve seen in terms of his personality, his character, leadership qualities.

The question over national eligibility continues to divide opinion, but Southgate insists he would never cap a player purely to make sure they were only available to England.

Asked about leaving out Southampton goalkeeper Angus Gunn, who also qualifies to play for Scotland, Southgate added: “I’m not prepared to pick players just to stop the possibility of other countries picking them.

“So (Crystal Palace right-back) Aaron Wan-Bissaka (who has played once for the Democratic Republic of Congo at under-20 level) is playing very well and he’s really pushing to be in our squad, there’s no question. I could pick players, give them a cap and stop them playing somewhere else, but I don’t think that’s right.”

Southgate’s lack of attacking options were laid bare as Bournemouth striker Callum Wilson stayed in the squad, even though he only returned from a seven-week injury lay-off in last weekend’s win over Huddersfield.

Captain Harry Kane has 20 England goals, with Marcus Rashford the next highest goalscorer with six.

Raheem Sterling broke a two-year international duck when he scored a brace in the Nations League win in Spain in October.

The 24-year-old has been in fine form for Manchester City this season and has already amassed 19 club goals.

Southgate believes he has been one of the best players in the country so far this year and also praised the forward for speaking out on issues such as racism in the game.

“He’s having another outstanding season,” Southgate replied when asked if Sterling was in the running for the player of the year award.

“I think there are other good candidates for that title – (Liverpool’s Dutch defender Virgil) Van Dijk would be one that would be obvious, we’re trying to plot a way past him in the summer – but he’s (Sterling) risen to every challenge.

“When I look at what he has done over the last couple of years, the competition for places that he’s had to fight and fend off – but I’m also so impressed by his maturity and the way he has spoken out on important subjects and been brave enough to do that.

“He’s showing huge social conscience in certain areas of his life as well. He really is developing into an outstanding role model for young people to follow.

“I think that’s really something that we should all admire in him. The football part has been there. He’s been in the first team since he was 17, but he’s now maturing and it’s wonderful to see.”

The fine form of Tom Heaton earned the Burnley goalkeeper a recall alongside club-mate James Tarkowski, while Harry Maguire and Danny Rose were also included.

Kieran Trippier pulled out of the last squad in November but was retained this time round, despite questions over his form and fitness, while Fabian Delph was kept in despite not starting a Premier League game for Manchester City since Boxing Day.