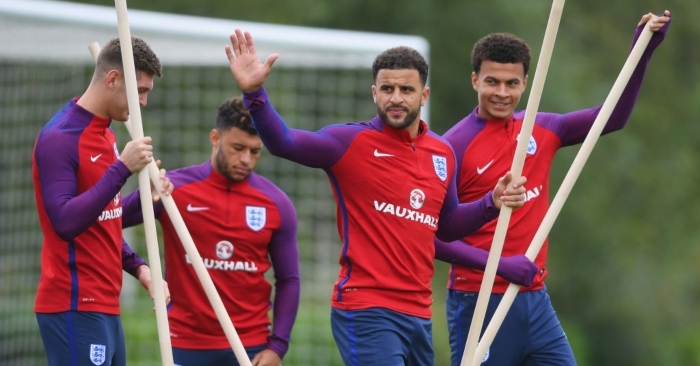 Gareth Southgate has explained the biggest decisions in his latest 25-man England squad.

England will hope to maintain their perfect European Championship qualification record so far, but without Jesse Lingard, Alex Oxlade-Chamberlain or Dele Alli.

The trio have failed to impress at Manchester United, Liverpool and Tottenham respectively this season, paying the price with their international places.

“We were really happy with all of the players. Most of them are fit and healthy and playing well for their clubs, so we didn’t see the need to change too much.

“Jesse’s had a difficult period with his club and I think in those areas of the pitch we’ve got players who are scoring more regularly at the moment and are in very good form.”

On Oxlade-Chamberlain in particular, he added: “It’s a little bit like Dele really where their seasons haven’t really got going for either of them.

“We’re expecting them to challenge in the coming months, but to put them in means I’ve got to leave someone out who is in form and playing well.

“So a Mason Mount or a James Maddison, one of those, they’re in competition with those guys in the squad. So whenever you ask me about who I’m leaving out of the squad, it’s about who I leave out to let them back in.

“It’s a difficult call in those positions in particular and I believe those players will recognise the rationale for the decisions.”

Asked to explain his call to stick with Kieran Trippier and Trent Alexander-Arnold at right-back instead of supposed first-choice Walker, he added: “I said last month that we wanted to look at a couple of the other fullbacks, different sort of profile and I was really happy with what Kieran and Trent did in their matches.

“They’re both in good form for their club, Kyle is also in good form; Kyle is a slightly more defensive fullback, has good qualities with the ball but the other two boys we felt did well last month and didn’t feel the decision to change would be the right one.”

With Foden, Southgate said that his time will come.

“Every player has a different journey,” he explained.

“Some go straight into a Premier League team, others have been in the lower divisions and worked their way up, and Tammy Abraham has been at a big club and then had the loan moves.

“There’s no perfect path, it doesn’t exist. It’s different for them all. Phil Foden’s training with great players every day. He’s still young and developing physically, and sometimes it’s not right to put them in too soon.