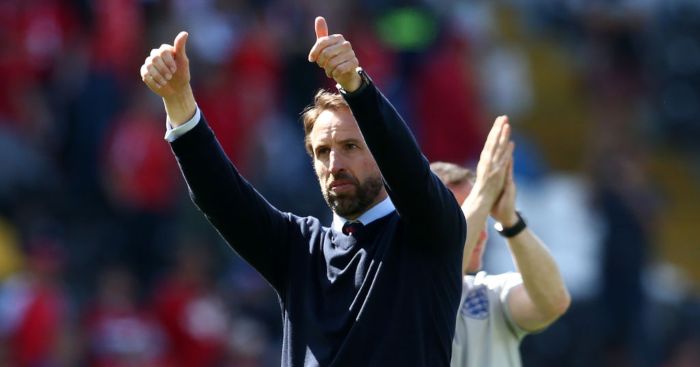 Gareth Southgate was delighted to see penalty shoot-out preparations bear fruit – but the disappointment of finishing third at the Nations League has only heightened the England squad’s desire to kick on.

An unremarkable third-place play-off against Switzerland came to a stirring conclusion at the Estadio D Afonso Henriques, where England’s glut of missed opportunities threatened to haunt them as the match ended 0-0 after 120 minutes.

But a year on from ending a run of five successive shoot-out losses at the World Cup in Russia, the man that helped Southgate’s men overcome Colombia on penalties was on hand once more.

Jordan Pickford denied Josip Drmic’s spot-kick in sudden death to seal a 6-5 win, having become the first goalkeeper to score a penalty for England in a competitive shoot-out. He fared well in our player ratings, too.

“We’ve prepared well for that eventuality and we’ve talked to the players about it,” Southgate said.

“The first group who arrived three weeks ago have been drilled and we knew in a competition like this that we could be in that situation again.

“It’s obviously lovely for all of the staff when all of that hard work comes to fruition.”

Ending with a victory was a welcome boost three days after the semi-final loss to Holland.

But there was no fanfare like the Three Lions witnessed after their third-place play-off loss to Belgium in Russia as UEFA went for a private handover, with a bag of medals waiting for them off the pitch.

“I’ve not seen them yet,” Southgate said.

“It’s quite ironic, really. We’ve had to go through another third/fourth play-off and the one we don’t even get them in front of the fans. It’s just lobbed to us.

“I remember some of the guys that were at Liverpool that I played with who said that Joe Fagan used to throw the medals down the back of the bus at the following pre-season and say, ‘get on with it and if you’ve played enough games, take one’.

“That probably would pretty much sum up where we’d be at with this.

“The only other medals like this we’ve been involved with was the Tournoi in Glenn Hoddle’s time.

“It’s nice that we’ve got at least some acknowledgement for what we’ve done over the last year, but I think we’ll all be parking it to one side and looking forward.

“We’ve all recognised that we’ve hit a certain level, but it’s not a level we’re satisfied with, and so we’ve got to go again.

“We’ve always done that each summer. I remember the first summer we played Scotland and France and we learned a lot from the game in France but we were really unhappy with the performance – and that inspired us to go away and plan the next year.

“The drive I’ve seen from the players over the last couple of days has given me energy because I can see that the commitment is there to want to take it further with England, they’re not satisfied with where they’re at.

“And that, as a coach, actually sometimes gives you a lift, because you think you’re the only one that’s driving things and up all night trying to prepare for the game and repair the other game from the other night.

“So, I take energy from all of my staff and all of the players, and they are a fantastic group to work with I have to say, and you saw that in the mentality that they showed today for the 120 minutes (of the game).

“But, we’ve got to keep getting better and we won’t settle until we do that.”