Home All The News Southgate: Maddison will have to learn from casino pictures 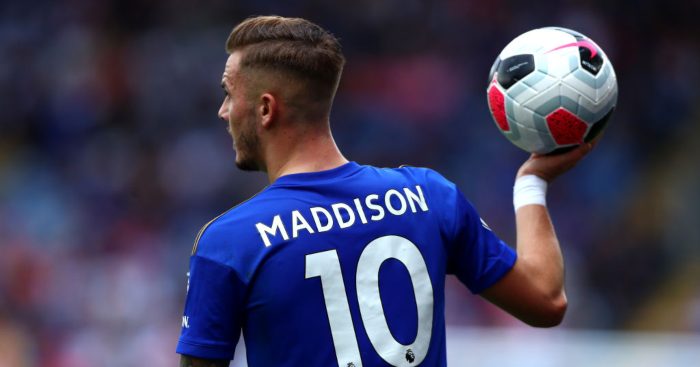 Gareth Southgate believes James Maddison has learned a valuable lesson about being an England player after being pictured in a casino following his withdrawal from the squad through illness.

The in-form Leicester attacking midfielder was this month included in the Three Lions squad for the third time, but left early without making his debut.

Maddison was unable to train due to an ankle issue that was compounded by illness, which led to his exit from the England squad on Thursday.

However, The Sun published a picture allegedly showing the 22-year-old in a casino as his team-mates were losing 2-1 to the Czech Republic in Prague the following day – a subject broached with Southgate in Sofia.

“Well, once a player has been released from the squad, then it’s up to them how they spend their individual time,” the England boss said.

“So, I guess what James has learned is that if you have an involvement with England, then there’s an increased spotlight on you and increased interest in your personal and private life as well.

“So, that goes with the territory, it’s a high-profile position.”

Southgate reportedly has reservations about Maddison but did not want to go into detail about this incident as he has yet to establish the facts given his focus on Monday’s qualifier in Bulgaria.

“No (I’ve not spoken to him today),” the England boss said. “He sent a message to say that the story was going to be in the paper and that’s it.

“To be honest, my focus has to be, as you can imagine, with the 23 players that we have here – 22 now with Danny (Rose) going – and getting the reaction that we want, getting everybody in the right place for the game tomorrow.

“There’s been many hours spent doing that, really.”

Southgate will talk to Maddison before the next international selection and was coy when asked if the Leicester player had apologised, just as he was about potential concerns over the player.

“I don’t really want to discuss individuals but I know pretty much everything about all of my players,” he added.

“I watch every minute of their football, whether that’s live or downloaded on a Sunday morning or a Sunday night, or a Monday morning.

“I speak to their club managers, I speak with Aidy (Boothroyd, England Under-21 manager) and all the coaches of the junior teams.

“So, we never know absolutely everything, but we have a very clear picture of every player, and that’s the due diligence that we should always do.”