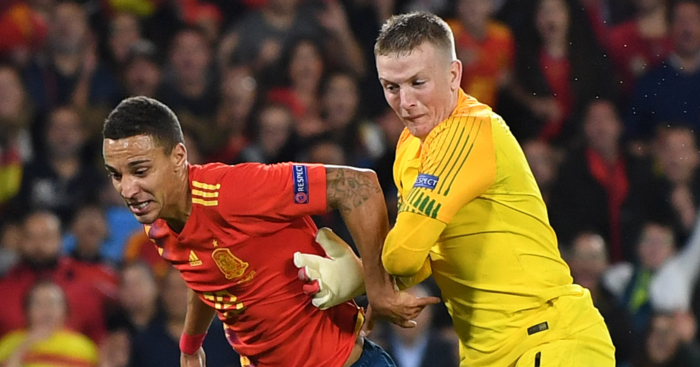 Gareth Southgate says that Jordan Pickford “will have to work on” his Cruyff turns at Everton.

The goalkeeper played a crucial part in the opening two goals, but left plenty to be desired when it came down to defending that lead. Our player ratings were nonetheless impressed.

At one stage, Pickford received the ball with space and time, but proceeded to try and do a Cruyff turn under pressure from Rodrigo, losing the ball and having to commit to a rather risky sliding tackle to avert the danger. Alisson would have been happy.

Southgate says that the “extra touch” Pickford was taking was a directive throughout the game, but that misguided bit of skill really was not.

“We’ve tried to talk to him about having an extra touch because at times when you do that the game opens up for you as a goalkeeper and some of those options become more apparent,” Southgate said.

“So I thought in the two matches he’s had this week, he’s shown real composure to do that, find passes into midfielders.

“He has got the technical ability to do it.

“He maybe hasn’t got the technical ability to do a Cruyff (turn) in his own six-yard box, but that’s something he’ll have to work on at Everton, not with us probably.”