Home Mailbox Southgate ‘maximising’ chances; ‘as good as it gets’ for England 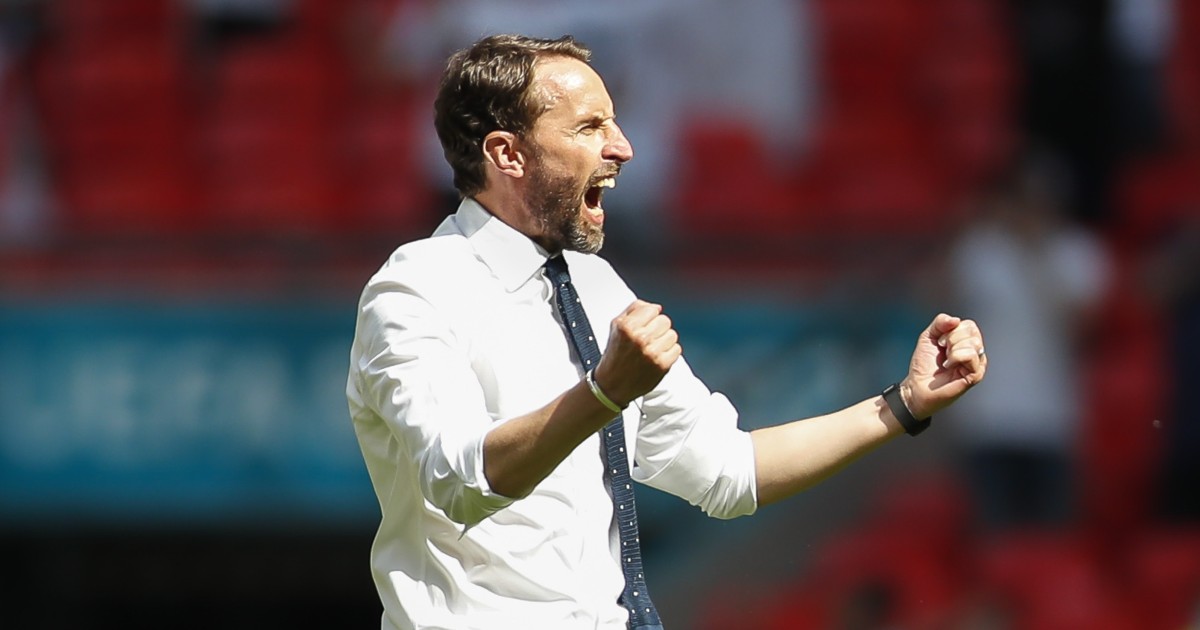 Keep your thoughts on Southgate or anything else coming to theeditor@football365.com.

If those games against other good teams, won 2, lost 2, drawn 1 were born out in this tournament, that’d be like a 50/50 chance of winning any given game in the rest of the tournament.

I’d take that! Because, crucially, there are objectively better teams in the tournament than England.

Ronnie suggests that those figures indicate that the current approach to games doesn’t work but, based solely on results, it doesn’t show that at all. It could just as easily show that if Southgate mixed it up and played a more attacking game that we’d get battered and that 50/50 record would get worse. Ronnie’s assessment must be based on the assumption that the England manager has access to playing resources that are equal to, or better, than any other manager which, if only he’d use them correctly, can be deployed to win 9 times out of 10. The other school of thought (that I subscribe to, though others may disagree), is that England have some quality players, particularly in attack, but are thinner on quality and experience throughout the squad than several other teams.

All things being equal, France and Belgium right now should definitely beat England on paper whatever Southgate chooses to do. With other teams, I’d say it’s less clear cut, but I wouldn’t call England outright favourites against Germany or most of the other teams still in the draw.

So the inference that there is something that Southgate can do that would improve England’s chances (e.g. a more attacking lineup) beyond what he’s already doing, I just don’t accept. I’m not saying that there aren’t better managers who could do it better, or make better in-game changes, but broadly I think he’s approaching things in exactly the right way to maximise England’s chances.

His record as England manager, lest we forget, is the best that we’ve had in decades. A world cup semi, the nations league semi, comfortable top-of-the-group qualification for tournaments…

I remember Sothgate responding to a question at the World Cup that summed this up pretty nicely. I’m paraphrasing,  but when asked if it would be better to finish runners up to get an easier run to the final, he made the very good point that that sort of talk was presumptuous, given it had been years since England beat any team in normal time in a knock-out game…

England, and us England fans, just don’t have the right to be talking in terms of what they can outright control to ensure they win the tournaments. It just isn’t in their gift. They have a better chance than most, but need to be canny, cautious and, ultimately lucky to win the thing.

Say want you want about Southgate, but the fact is that his England team are the most genuinely competitive that I can remember in my lifetime, and they have room to improve further. I’m happy with that… but they’re still not favourites.
Andy (MUFC)

Southgate as good as it gets
Southgate has backed himself into a corner now.

Regardless of what he does now if England lose he will be blamed.

If he uses the same tactics he has so far people will say he should have taken off the brakes. If he switches and goes more attacking (very unlikely) people will say why not just stick with what worked.

Because unless he won the tournament he was ALWAYS going to be blamed by England fans. And even if he did win it they would still say it was in spite of him, not because of him.

The ironic thing is he was appointed for being a safe inoffensive choice to steady what was (still is) a rickety ship but in accepting the job he made himself the scapegoat just by being Gareth Southgate.

The arguments of no experience or credentials at club level don’t work really when you look at how many international trophy winning managers have won international tournaments with little to no experience at club level. But still Southgate isn’t good enough, he never was and never will be for England fans because they still don’t realise….they’re not as good or important as they think and Southgate is as good as it gets .
Lee

Away goals rebuttal
I want to have a little whine about UEFA’s latest hair brained idea to remove something ” for the good of the game “. I’m of course talking about the removal of the away goals rule. I could understand the rationale of removing it from extra time , what’s the use of removing it from the two legs , my issue is that it takes away some of the jeopardy here are some iconic champions league games that have less of a context

United beating Juve ,in that 99 semi…. Without away goals ,Juve know they only need one goal .

That crazy Nani quarter final in 2009/10 against Bayern

Manolas’s goal in Roma vs Barca

The recent classics between Liverpool and Barca/Atletico

These iconic moments will no longer have the same impact , Football will of course change and late 90minute winners will become all the rage but there was something about have the wind knocked out of a team 10 minutes from time that will be lost ….

There are those who will think this will lead to less defensive football , probably not the case it might even increase cases of smash and grab
TIMI, MUFC

Greening of football
Seeing JM’s mail refer to Johnny Nic as a zealot for carefully articulating his considered views on the greening of football has irked me somewhat. Is runaway heating of the climate a fictional villain? Is the current mass extinction event we are living through merely the fever dream of mars bound digital gods? Apparently there is no crisis until the effects of an ecological cascade come knocking on your door.

Sadly, there is a climate emergency and there’s plenty of academic and first hand data to show it, wanting to respond to this in the hope of survival on the only known inhabitable planet is not zealotry, it is the opposite. Zealotry is condemning such action and defending the exploitative systems of the status quo while temperature records fall, sea levels rise and vast swathes of land literally burns in flames, not to mention all the other anxiety inducing effects of our ecological mismanagement. We’re in a pyramid scheme run by death cults and it’s not going very well.
Despite the good words from some world leaders, most post pandemic economic recovery plans depend on expanding the exploitation of fossil fuels. If we want better things to be possible, this is something that really can’t be allowed to happen. So yeah, stop flying you selfish prick(s).

But the ‘old enemy’ Germany thing the tabloids are pushing now really pisses me off.

Do they really believe it or are they just playing to, and generating, a xenophobic readership?

Probably the latter, but what does that say about them and us?

Do they feel any shame or is it just about the clicks?
Aidan, Lfc (having read Mediawatch for years I could nail a misleading tabloid story/headline but unfortunately I’m not a…)

Ukraine hat tip
I would just like to propose a toast to Ukraine for qualifying for the last 16 of Euro 2020. Yes, they only beat North Macedonia and did it with 3 points but the tournament structure is another matter and by hook or by crook they’ve reached the knockout phase. Not every team can be the big glamourous superpower and not every team in a tournament is a contender for some reaching the last 16 is as good as it will get and they have done that. This is also added to the fact that they won the u19 World Cup in 2019. Faced with the political issues that the country has undergone in recent years with the constant worry of civil war it is highly commendable that as a football nation they continue to maximise the resources at their disposal. This is also done at club level with constant representation in the champions league. Best of luck in the last 16 Ukraine but you already go home with your heads held high!
Johnny, Tipperary.

The two faces of UEFA
UEFA’s response to the mayor of Munich asking to light up the Allianz arena in rainbow colours was so unbelievably two faced.

On the one hand rejecting the request on the basis it was a political gesture and then going on about how the rainbow flag is not political.

Always makes me laugh when UEFA gets on its high horse about clubs doing something of which it disapproves, then goes all wishy-washy when it comes to getting tough on real issues like racism and homophobia. Either coming out with some pithy statement, tiny fine or no action at all.

They want to sit on the fence in fear of upsetting someone, some benefactor or Eastern European friendly. When will they realize that sitting on the fence essentially makes you racist snd homophobic as well?
Paul McDevitt