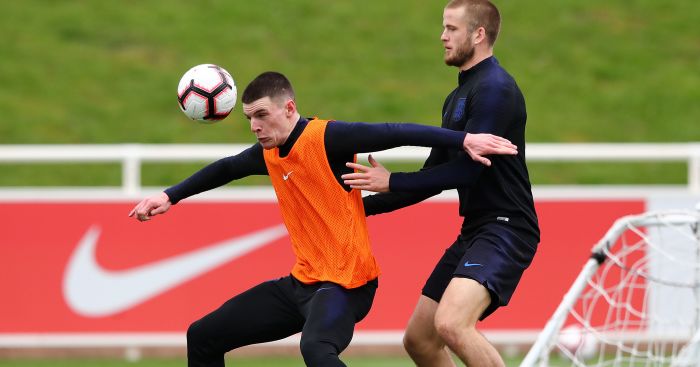 England manager Gareth Southgate will talk to Declan Rice about old social media posts which appeared to support the IRA, but insists they will not play a part in whether or not he makes his debut on Friday night.

The West Ham midfielder issued an apology on Thursday after old Instagram comments resurfaced, only adding to the spotlight already on the 20-year-old after he switched allegiance from the Republic of Ireland.

Rice’s Instagram posts were unearthed on the eve of the Euro 2020 qualifier against the Czech Republic, with one saying ‘My brudda. UP THE RA. Wait till we draw England’, and another using the hashtag ‘UPTHERA’.

Capped three times at senior level with the Republic of Ireland, Rice decided to represent England moving forward and was called up by Southgate at the first opportunity after FIFA ratified his application.

Rice moved swiftly to apologise once the old posts were circulated online, writing an Instagram story which read: “I am aware that a poorly-expressed comment I made when I was a junior player has been circulated on social media.

“I recognise now that my attempt to show support for my team-mates at the time could be negatively interpreted.

“While my naive words were not meant to be a political opinion and do not represent who I am, I sincerely apologise for any offence caused.”

The Football Association was quick to react when Rice’s comments were published, with an official saying: “We are aware of the matter and will be writing to him to remind him of his responsibilities.”

Southgate, too, said he would seek a discussion with Rice, but said the incident would not have an influence on whether he hands the player his maiden England cap.

Asked if he had spoken to Rice, Southgate replied: “I haven’t had a chance because it’s basically broken as I was on the way down.

“I’ll go and just make sure he knows that firstly, that he’s OK and that he’s supported. I understand that it’s not a situation that should just be dismissed but equally the context, the period of time that’s passed and his age at the time is all relevant in how we should deal with it.

“It won’t affect anything in that respect (whether Rice plays or not).

“He’s fitted in really well with the team. He’s looked excellent. There isn’t a player that has been in the squad who I would hesitate to start in the game, so I am very confident in all of them.”

Southgate offered a defence of Rice and believes most people will be understanding of the situation.

“That is the perils of social media for any of us with kids,” he added.

“There are so many positive things about social media, but, as we know, there are lots of negatives.

“It’s not representative of what he believes and feels, and his views.

“And outside of that, the obvious point is that this was when he was 15 or 16 when he was engaged in a social conversation with friends.

“I think any of us at that age, in those sorts of situations have probably said things, discussed things, written things, that might not look the way that’d we’d want (them to) several years later, so I don’t think he can say or do any more than he’s said at this point in time.”

“I think people understand. Most people will have children of those sorts of ages and people are still maturing at that age.

“You’re in conversations with friends that, you can get giddy and you can say things that maybe you don’t even know enough about or you don’t understand the context.

“So, I think our fans and our public will recognise that fact.”

Then there is the fact that a minority of England supporters chant anti-IRA songs, as well as “no surrender” during the national anthem.

Asked if the Rice’s situation undermines the FA’s work to eradicate such issues, Southgate said: “Well, we have to make sure that it doesn’t.

“Our message doesn’t change, and I think Declan’s statement is consistent with that, so we still would be against any of our supporters taking up that sort of stance and I don’t think anything changes from an FA or England point of view.”