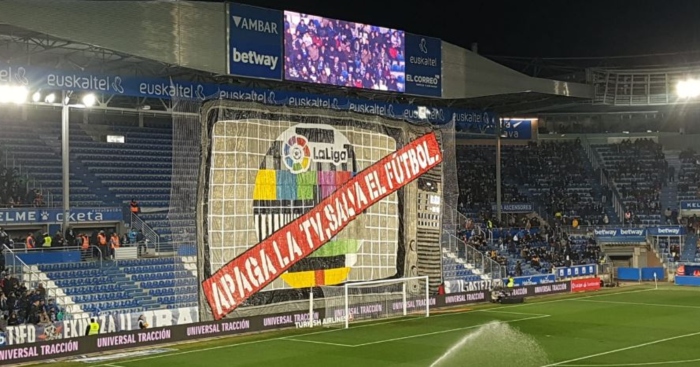 Rayo Vallecano v Leganés – the other, other Madrid derby – took place on Monday night with both clubs needing a win to lift themselves clear of the relegation zone. Leganés were the eventual victors, winning 2-1 despite having Allan Nyom sent off, but this fascinating match was not only remarkable for what transpired on the pitch, but also for what happened in the stands.

In the first half, both sets of fans united in turning their backs to the pitch for two minutes as a protest against the fixture being scheduled for Monday at 9pm.

This is not the first time fans have voiced their dissatisfaction with the scheduling of matches at ridiculous times, and it surely won’t be the last. La Liga and the pay TV channels share an antipathy towards matches being played concurrently, as screening the matches one by one allows them to maximise advertising revenue. The result is that games are played across the weekend from Friday to Monday, sometimes in the morning and often very late at night, without a moment’s consideration given to how this might affect the fans.

Certain matches are scheduled to fit in with optimum viewing times in Asia or America, and kick-off times and dates are often not confirmed until two weeks before the matches are due to take place. Rescheduling at short notice is commonplace, which can make it nigh-on impossible for fans to make plans around going to the game. This lack of certainty is a surely a contributing factor to the small number of fans travelling to away games in Spain.

Supporters in Spain are being afflicted with many of the same issues that John Nicholson railed against in his excellent article earlier this week, in many cases to an even greater extent, and more and more of them have had it up to their cojones.

Last year, the La Liga TV rights package was sold to communications giant Telefónica for just shy of €3bn for three seasons; a fair bit less than the £4.5bn Premier League rights deal for the same period, but still a mind-bogglingly vast sum of money. While TV revenues are split evenly among the 20 Premier League clubs, the distribution of TV money in Spain is weighted heavily in favour of the top clubs.

But just as in England, pay TV matches gain significantly lower viewing figures than free-to-air games. Last season’s highest viewership for a pay-to-view game was the 2.2 million that tuned in to watch Barcelona v Atlético Madrid, which is dwarfed by the 10 million who watched Real Madrid’s Champions League last-16 clash with Paris Saint-Germain on free-to-air TV.

With the cheapest available subscription for La Liga coverage coming in at €68.80 per month, it’s no surprise that so few people are watching, particularly in a country that was hit hard by the financial crisis and still has sky-high rates of unemployment. While match ticket prices are generally less expensive in Spain than in England, they are still not cheap, and so fans are being priced out of football all over the country.

But even if you could afford to go to the game, La Liga and the TV rights owners’ thoughtless attitude to fixture scheduling often makes it very difficult to attend, particularly if you are a fan of a provincial club. Just as the TV deal is loaded in favour of the bigger clubs, so too is the match schedule.

The unfairness, the expense and the greed is turning people off the modern game.

Is it surprising that Celta can rarely fill their stadium? Perversely, they were fined by La Liga two years ago for having too low an attendance, and were punished earlier this season for not positioning enough fans in line with the TV cameras. If La Liga is so desperate to project the image of a full stadium, why not schedule games for a time when people can attend, and set the date far enough in advance to ensure people can go? They can’t have it both ways.

It is clear that the game is becoming more and more about the money and less about the fans, and the powers-that-be in Spain make almost no attempt to hide it. The fans can protest as they did in Vallecas on Monday night, but will their voices be heard?

There have been similar protests from fans of other clubs in recent years, but they gained surprisingly little press coverage, and were unsurprisingly ignored by the TV channels.

But the more the fans protest, the harder they are to ignore. The impressive tifo displayed by Alavés fans in their game against Athletic Club earlier this season saying ‘turn off the TV, save football’ was eye-catching and was widely shared on social media, and will hopefully inspire fans of other clubs to take up the cause.

This method has worked in Germany – after significant fan protests, the Bundesliga has decided to drop Monday night matches from next season onwards.

The German fans have shown it can be done. Now fans in Spain, England, and everywhere need to keep fighting the good fight, and remind those in power that football belongs to the fans, not to the fat cats.