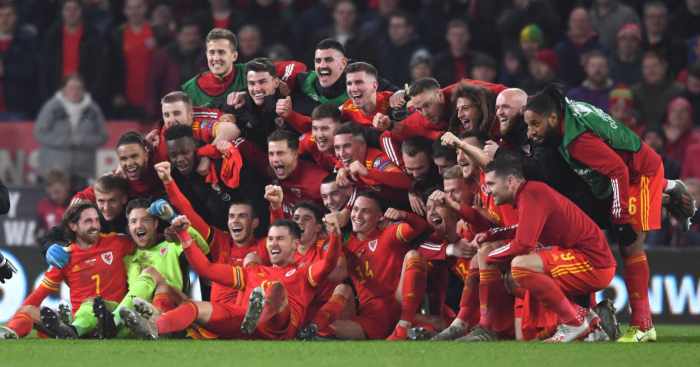 Gareth Bale has risked the wrath of Real Madrid by celebrating Wales’ Euro 2020 qualification success with a Welsh flag poking fun at his Spanish club.

Bale – who has played four times for Wales since his last appearance for Real on October 5 – has been criticised in Spain in recent months for putting country before club.

Former Real striker Predrag Mijatovic spoke out against keen golfer Bale in a newspaper article, saying: “The first thing he thinks about is Wales, then golf and after that, Real Madrid.”

Wales fans have turned the mantra ‘Wales. Golf. Madrid’ into a chant, with Bale himself admitting he found the song amusing.

And Bale provided his critics with more ammunition after Wales’ 2-0 home victory over Hungary on Tuesday secured their place at Euro 2020 next summer.

As Bale celebrated qualification with team-mates, he was directly behind a Welsh flag which said ‘Wales. Golf. Madrid. In That Order’.

The Spanish media reacted angrily on Wednesday to the pictures of Bale posing with the flag.

Sports daily AS’ headline read “Bale is ‘mocking’ Madrid with the ‘Wales. Golf. Madrid’ flag”, while Sport.es queried whether Bale should be punished by his club.

“Bale had no qualms about being in the centre of the image, practically carrying the flag where you could read this message that clearly implies a contempt against the Madrid club,” Sport.es said.

“Now we need to know if Real Madrid will take any action against its player, considering it as a clear contempt and attack on the club’s image.”

But the influential Madrid daily sport newspaper Marca said Real would not punish Bale, because the relationship between the player and manager Zinedine Zidane is “broken for good”.

Bale has not played for Real since picking up a calf injury on international duty for Wales in October.

The 30-year-old, however, linked up for Wales’ Euro 2020 qualifiers with Azerbaijan and Hungary, playing an hour in Baku last weekend and 88 minutes in Cardiff on Tuesday.

Bale prompted an angry response from Real fans before the Azerbaijan game last week by saying he enjoyed playing more for his country than his club.

“I definitely have more excitement playing for Wales,” Bale said.

“I’ve been with most of the older players since we were in the under-17s. It’s like playing with your mates down the park on a Sunday. It’s normal.

“With Wales, I’m speaking my own language and feel more comfortable.

“But it doesn’t change what I do on the pitch. I always give 100 per cent on the pitch wherever I am, that’s what I always strive to do.”

Bale’s future in Spain has been under constant scrutiny since Zidane returned as Real manager in March.

The player’s agent Jonathan Barnett called Zidane a “disgrace” in July after the Frenchman said the club was “working on his departure”.

Bale’s proposed move to Chinese club Jiangsu Suning, where he was reportedly to be paid £1million a week over three years, collapsed at the 11th hour.

The Welshman, who joined Real from Tottenham in 2013 for a then world-record fee of £85.3million, returned to the first-team fold and scored twice in six league games.

But Bale, who is contracted at Real until June 2022, could move on in January with China and the United States possible destinations.