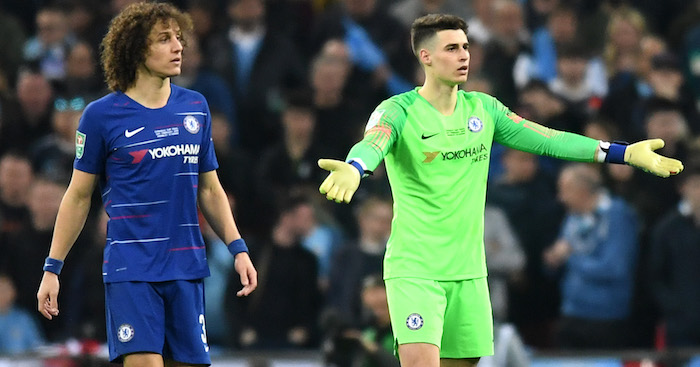 Arrizabalaga provoked fury from Maurizio Sarri at Wembley in February when the Spaniard refused to leave the field in the final moments of extra-time against Manchester City.

Extraordinary situation as Kepa refuses to come off for Cabellero and player power wins as he stays on the pitch for the remainder of extra time.

The keeper appeared to be suffering from cramp but he was aghast when it seemed he was going to be replaced by Willy Caballero ahead of the penalty shootout.

Sarri was incensed by Arrizabalaga’s actions but the Chelsea boss later said that the episode had been ‘a misunderstanding’.

Chelsea fined the goalkeeper a week’s wages and he was dropped for the visit of Tottenham in midweek and now Zola has explained the crazy situation six months on.

“In the beginning he misunderstood,” Zola told beIN Sports . “He was pretending he was injured because he wanted to waste time.

“There was nothing really wrong but we then made some considerations. We knew we had Willy Caballero on the bench, who knew all of the Manchester City players and so it was an opportunity for us.

“We were going to make the change. It wasn’t pre-arranged but we saw the day before he was injured, so we thought it was the injury coming back and we saw an opportunity because Caballero knows the Manchester City players so he can also be a good thing; simple as that.

“It was obviously not an easy situation to deal with. We could not believe it, we were speechless, we kept telling him to come off but he didn’t come”.