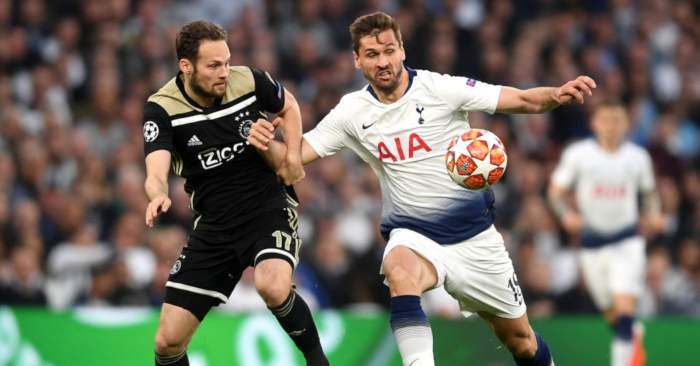 Was this ultimately a first leg which left both sides disappointed? Tottenham will shoulder most of that regret, of course, but the mood of Donny van de Beek’s interview after the game betrayed that, for Ajax, this was an opportunity not quite taken.

At the half-hour mark at White Hart Lane, the visitors had enjoyed 67% possession, had fashioned six shots to Spurs’ one, and had fortressed themselves inside the home half for long periods, knifing their way through their hosts’ midfield at will. They had a one-goal lead, beautifully constructed and well-taken too, but it was inadequate reward for their early superiority. Post-game, Mauricio Pochettino bemoaned his side’s lethargic start and, while his players have been physically wilting for some time, that was only a partial diagnosis.

Early on, Ajax were just better. Brighter, smarter, full of creativity, intent and, sadly, a life that Tottenham just didn’t possess. At that stage of the game, they should have been on their way to building an insurmountable lead. But they weren’t. The second goal never arrived and while Spurs never came close to equalising, the flow of the rest of the match betrayed flaws within a team which has spent the last few months being praised to the heavens.

Matt Stead referenced this in his post-match piece, mentioning Moussa Sissoko’s dramatic effect on the game and also the fractures created by Pochettino’s pivot to a more physical and direct style.

It was a telling and instructive tweak. Ajax have earned their plaudits this season, but they are not invulnerable. Tottenham did not carry enough energy into the game, clearly, but perhaps the bigger mistake was to begin the tie with such an obvious inferiority complex. They tiptoed into the game. They played in a passive, deferential way which was always likely to suit their opposition’s strengths and they very nearly paid a heavy price.

What will have alarmed Erik ten Hag is how awkwardly his side adapted to Tottenham’s change in approach. From a stylistic perspective, the second 45 minutes was ugly and blunt, with Spurs no longer attempting to finesse their way through the midfield, opting instead to skip the press, aim long for their forwards, and attempt to create opportunities from the fragments. It was hardly compelling, but gradually the pressure did begin to build; Ajax are a socks-up, clean-shirt kind of side in midfield and attack, and that began to show.

After the break, Tottenham had 60% of possession, ten shots, and actually passed the ball with greater accuracy than their opponents. They weren’t very good at all, but they were still somehow in the ascendency.

And in so doing, Pochettino’s players exposed their dirty little secret: as attractive as they can be and as cultured as they are, Spurs are a very effective long-ball side. Admittedly less so without Harry Kane, but – still – when they’ve found difficulty this season, it’s that tactic that has often provided sanctuary. It’s delivered goals, too. Against Burnley at Wembley, twice against PSV in the Champions League group stage, and once more, late on, against Inter Milan.

It’s hardly pure, Route One football, registering just one or two on the Fashanu-Jones Scale. Instead of repeatedly aiming long for a target man, the approach seems to be characterised by a more eclectic force, mixing traditional long passes with direct, vertical running with the ball and a generalised haste. One of the reasons why Sissoko has been so important to this side, for instance, is not just because he’s able to cover so much space, but because when receiving possession his next move is nearly always to head north at top speed.

There were signs of that working on Tuesday night. Dele Alli had a snap shot right at the beginning of the half and, after Llorente had spidered around a few challenges, a second half-chance fell to him shortly after. Both Danny Rose and Lucas Moura might also have done better with balls that fell to them in space. Those moves all featured a degree of finesse somewhere, either at their genesis or end, but they all depended on short, sharp pulses of play and a state of relative chaos.

And that troubled Ajax. If in the first half they had looked every inch the team who brushed aside Madrid and Juventus, in the second it became easier to understand how they have kept just one clean sheet in their last eight Eredivisie games. Their individual parts were absolutely as advertised and their attacking play, collectively, was exactly as billed, but when the conditions of the game changed and the match became about something other than who could construct the sharpest triangles, their control loosened. That didn’t make them undeserving, they were clearly the better side and they conceded just a single shot on target, but the nature of that second half and what its rhythm seemed to show makes their one-goal lead appear very slender indeed.

The goals conceded by Ajax in 2019 also show encouraging trends for Tottenham. They have difficulty defending crosses and tracking runners who move late into the box – Juventus and Cristiano Ronaldo showed that – but even domestically they’ve demonstrated a sporadic inability to protect the area in front of their defence, and also exhibited issues at the back post and inability to prevent crossing opportunities. Many of those league games have been one-sided, Ajax have scored four goals or more in four of their last five, but the way they concede and the weaknesses which exist either side of the outstanding Matthijs de Ligt should make the return leg very tricky indeed.

Whatever Poch slipped into Llorente’s half-time Werther’s Originals, it seems to be working.

Of course, Pochettino will have Son Heung-Min available in a week’s time. Son’s goal threat is of critical importance given the deficit that Spurs will be chasing, but he also aligns conveniently with those Ajax issues. From a structural perspective, his mobility offers a waspish pressing option that Tottenham didn’t have in London and his speed will restore the counter-attacking threat that proved so invaluable against Manchester City. More importantly, though, he offers a direct challenge to any isolated full-back, forcing a defence to compensate and leave space somewhere else within the attacking zone. Son is two-footed, he can beat his man on either side, and one defender alone can’t mark him.

Logically, he should replace Alli. Pochettino is incredibly loyal to his young midfielder, but he will surely have recognised that Alli is not comfortable playing with a cast on his wrist and should also have noticed that, in the game at the Etihad and again on Tuesday night, many moves died at his feet. His touch has vanished, the instinct in his passing has been mislaid; if Spurs are to make Ajax uncomfortable, then everything they do in the second leg has to be done much, much quicker. Son will grease their gears, no doubt about it, but a Champions League semi-final isn’t the right time to allow anyone else to play their way into form.

To claim Spurs as a favourites is clearly too optimistic. It would be disrespectful, too, because Ajax earned their lead and haven’t progressed to this stage of the competition via a series of anomalies. They’re excellent, but they’re also now being over-estimated. The pundits, the press and perhaps even Tottenham themselves have been a little blinded by the translucent light around these players and are guilty of ignoring their minor, but significant imperfections.

There is no mountain to climb now, only a game to win.