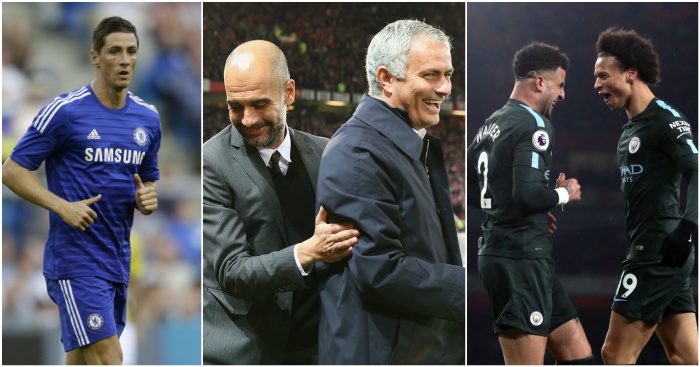 This all starts – as these things often do – with Harry Redknapp. “Guardiola’s going to leave Bayern Munich at the end of the season,” Redknapp said in December 2015. “I’d like to see him go to Dagenham and Redbridge. I think that would be a challenge for him. Let’s see if he can get them up to the Premier League; if he does that, we’ll all say he’s the greatest manager we’ve ever seen.”

As ever with Redknapp, the insult was hardly veiled. As well as questioning Guardiola’s reputation as a coach, he was implying that it is easier to manage an elite club because you get to spend lots of money on players. The irony of that accusation coming from perhaps the most famous – or infamous – English exponent of the transfer market should not be missed. How could it be? Sandra would bury that.

That same trope has become the albatross around Guardiola’s neck since it became clear that Manchester City would win the Premier League title. During 2016/17, Guardiola was told that he must adapt to English football. As soon as it became clear that the vice versa was actually true, the qualifiers began to appear. ‘Oh well done Pep, you won the league while spending the most money. How hard that must be.’

Perhaps these are merely the groans of green-eyed monsters. Redknapp was miffed to have missed out on elite club jobs, while supporters of Manchester City’s rivals appease their own disappointment by deflecting attention away from their own club’s failings. Welcome to tribalism, where a supporter must live their life through their football club.

Focus on the money spent by a manager is a relatively new concept, which is odd given that ‘biggest clubs spend the most money’ is hardly unfamiliar. When Arsene Wenger joined Arsenal and revolutionised the club’s coaching system before winning the league, very few people said “the thing is Dave, he’s brought in Vieira, Overmars and Petit and inherited a great squad anyway. Bespectacled fraud, if you ask me.” The focus was on what Wenger changed and improved, not what he bought.

Firstly, there is an element of ‘old man shouting at clouds’ to this debate. Heavy spending is a reality of top-level football, and a prerequisite of elite club management. Pretending anything else could happen is farcical. Why would we see what Guardiola would win without spending, when he is the manager of Manchester City and Manchester City have vast wealth to call upon? Everton have bought nine players for more than £20m each since the start of last season, for goodness sake. Everyone is loaded.

Yet there is an extra level of nonsense here: the assumption that spending money makes success come easy. In reality, high spending narrows the margins for success and lowers the patience of owners, supporters and the media, particularly as selling clubs push up prices thanks to the increased transparency over enormous transfer budgets. Spending money is easy; spending money well is far more difficult.

Elite club management is not more straightforward than managing Dagenham, to use Redknapp’s example, merely different.  The higher the spend, the brighter the spotlight, the further the fall.

How many successes? Three? If the (perfectly reasonable) argument is that Jose Mourinho inherited a squad far lower on talent than Guardiola did, that only emphasises how hard it is to spend money well. Louis van Gaal, David Moyes and even Alex Ferguson – in his latter days – struggled to do it well.

And so to the list of players arriving at Chelsea for £25m or more, this time only since the start of last season: David Luiz (going?), Michy Batshuayi (going?), N’Golo Kante, Danny Drinkwater (going?), Tiemoue Bakayoko (going?), Alvaro Morata (going?) and Antonio Rudiger. Drop the cut-off fee, and Ross Barkley, Emerson Palmieri and Davide Zappacosta can be included. How many successes on that long list? One?

The same is repeated elsewhere. Tottenham have spent far less money than Chelsea, Manchester United or Manchester City, but their recent history is littered with players who haven’t worked out (Fernando Llorente, Vincent Janssen, Moussa Sissoko, Georges-Kévin N’Koudou, Clinton N’Jie, Kevin Wimmer). Everton’s transfer activity last summer has been shown to be catastrophically bad in hindsight. Arsenal spent more than £30m on both Shkodran Mustafi and Granit Xhaka, and we’ve seen precious little from either to suggest they were good value at half the price.

Finally, look at the last three players to break the British transfer record: Angel di Maria, Fernando Torres and Pogba. One is considered to be one of the worst signings in Premier League history, another left England after one season of struggle and the third is now reportedly fighting for his Manchester United future.

Importantly, these are not bad players; they flourished elsewhere. But ‘very good player + very good club = very good transfer’ is simplistic fallacy. Time and again it is proven, so to repeat: Spending money well is damn hard.

And yet Guardiola and Manchester City have bumped that trend. The list of ten players that the Spaniard has signed for £20m or more: John Stones, Leroy Sane, Gabriel Jesus, Ilkay Gundogan, Kyle Walker, Ederson, Danilo, Benjamin Mendy, Aymeric Laporte, Bernardo Silva. Are there any on that list who could be considered failures? Flip that on its head, and at least five have been raging successes, integral parts of City’s title canter.

Look too at the ages of the players Guardiola has spent City’s money on. Seven of that ten-man list joined the club at the age of 23 or under. The oldest was Walker, who arrived at Manchester City weeks after his 27th birthday. In contrast, three of Manchester United’s major signings under Mourinho: Mkhitaryan (27), Sanchez (28), Matic (29). Guardiola bought a team for tomorrow and knitted them together today.

Crucial to all this is Guardiola’s increased power within Manchester City’s structure, and the influence he has over player recruitment. Txiki Begiristain made a number of high-profile errors before Guardiola’s arrival, when neither Roberto Mancini nor Manuel Pellegrini enjoyed anything approaching omnipotence: Eliaquim Mangala, Wilfried Bony, Fernando and Alvaro Negredo were four. Guardiola’s increased sway, joining his former Barcelona colleague, has vastly improved that record. The arrival of Carles Planchart as a video analyst with a significant role in the assessment of potential transfer targets helps too; Planchart worked with Guardiola at Barcelona and Bayern Munich.

Guardiola has done many things well; a 16-point lead ahead of a competitive top six prove that. It is tempting to view this as a victory for his coaching methods, obsessiveness with minutiae and exemplary man-management, and on all three counts the manager has indeed been a game-changer for City. But arguably Guardiola’s greatest achievement lies in his transfer market activity, and his eye for finding the right fit for his needs.

While Guardiola’s critics might use his outlay on players as a stick with which to beat him, the opposite deserves to be true. Rather than ignoring his spending, embrace it. At a time when the clubs directly below them are preparing their own transfer warchests, it’s just another thing Guardiola and Manchester City are doing smarter and more efficiently than their rivals.

Gallery: Check out the world’s most beautiful golf holes (Golf365).

Loose Pass: What rugby could learn from Man City and football (PlanetRugby).

Remembering when Rafa Nadal came of age on clay (Tennis365).