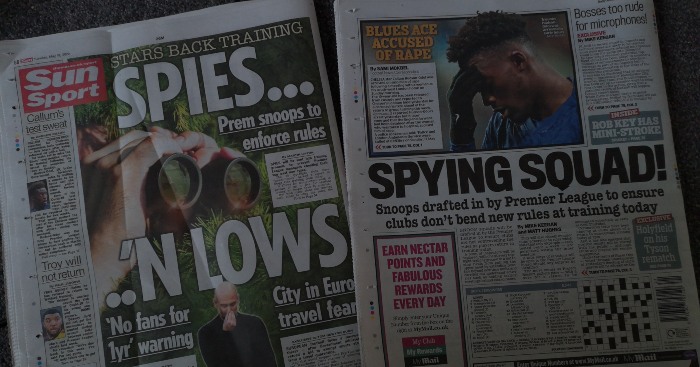 The Spy Game
So Premier League clubs can train once again – under very strict conditions designed to limit the spread of coronavirus. Remember that tiny detail about limiting the spread of coronavirus and thus decreasing the possibility of deaths as you take a glance at the tabloid back pages and conclude that they must have been written by children. Or middle-aged men. It’s quite often so difficult to tell the difference.

‘SPIES will be sent into training grounds to prevent Premier League managers cheating their way past new rules’ – The Sun.

Or alternatively, the Premier League have signalled their intention to have “an inspector or monitor at every ground”. Can they really be called ‘spies’ if they announce their arrival? And we really don’t think they will need binoculars, a trench-coat, fedora or any other 1950s cliche from a child’s fancy-dress party.

‘With many clubs not trusting each other to obey the rules, the Prem have assembled a crock squad of snoops who have the right to demand entry to training centres and check nobody is sneaking in extra sessions or contact work.’

What The Sun are describing there is an “independent audit inspection team”. By their definition, health and safety inspectors, financial auditors and the entirety of the police force must be ‘snoops’. How dare they issue a set of rules and then check that they are being followed as they attempt to limit the spread of a highly contagious virus?

Over at the Daily Mail, they take the baton and write about ‘SNOOP squads’, even though the second paragraph reverts to the more adult vernacular of ‘a team of inspectors’. Seriously, did they think the Premier League were going to agree a complex set of protocols DESIGNED TO LIMIT THE SPREAD OF A PANDEMIC and then simply never check they were being followed? Now that would be a back-page story.

Moving dates
Martin Lipton, The Sun, May 4: ‘The Prem aim is to start on June 12, as SunSport exclusively revealed on Saturday, but the fresh plan gives an extra week if there are complications. But it means matches MUST begin by June 19 — just under seven weeks away — or it will be impossible for the games to be completed before Uefa’s domestic league cut-off date of August 2.’

Martin Lipton, The Sun, May 19: ‘Masters accepts the official June 12 target is now just a “staging post” and with managers wanting up to four weeks of intensive work, June 19 or even June 26 are more viable.’

Forever blowing bubbles
Now we must turn to Martin Samuel in the Daily Mail as frankly he gives us no choice. Now he might have a point that any method of deciding relegation on mathematics is flawed, but his reasoning against the Weighted Points Per Game system (widely seen as the fairest by commentators elsewhere) is an absolute nonsense designed to obfuscate his obvious objection: That it would relegate his own beloved West Ham.

‘As it stands, there is one headline: the team currently in 16th place, two positions clear of relegation, go down. Yet let’s start at the top, and work from there. Liverpool have a 100 per cent record at Anfield. They have won every game. Their WPPG at home, then, is unquestionably three. And as there are only three points available in any game, that would appear to be the end of it. But, no. The away team will also have a WPPG calculation for their games on the road. And Liverpool’s next home game is against Aston Villa.

‘So while Brighton, Bournemouth, Watford, West Ham and Norwich went to Anfield, lost – in some cases by the margin of a single goal – and came away with nothing, Villa will lose, because Liverpool get the maximum three points, but still come out with 0.53 points. It’s a 3.53-point game.’

It sounds mental when put like that, until you realise – and Samuel really does not make this clear – that those 0.53 points still won’t save Aston Villa from relegation because they actually have the second-worst away record in the Premier League.

Oh and it works the same for every club. So West Ham will ‘lose’ to in-form Manchester United at Old Trafford and get 0.8 points; Villa worked hard for an actual, real-life draw there and came away with just 0.2 points more.

‘What a terrible shame for all those other clubs who visited Anfield with just three points on the table. West Ham, who only succumbed to an 81st-minute winner; Brighton and Bournemouth, who suffered narrow 2-1 defeats.

‘A 3.53-point game could really make a difference to their final standing in this imaginary league with very real consequences.’

We presume that Samuel either a) did not do the maths here or b) did them and decided it really did not help his cause, but West Ham being awarded 0.53 points for their defeat at Anfield really would make no difference at all to their relegation. Give them all 0.53 points for their narrow defeats and the end result is that the gap between the Hammers and 17th-place Bournemouth would actually increase.

‘Brighton and Bournemouth have five home matches remaining with the potential for 15 points if they win them all. Yet, given the opposition, the most that can be awarded in home matches involving Brighton is 14.04 points; for Bournemouth’s home programme 12.25. That isn’t right. How can both Manchester City and Liverpool get more than two points each when they meet; yet West Ham play Aston Villa for 1.6 on the final day of the season?’

Because it’s not real, Martin. None of these teams are ‘meeting’ and nobody is ‘playing’ anybody; it’s called maths. And the only reason you are annoyed at this maths is that West Ham will be relegated.

And why will West Ham be relegated under this system? Is it because Aston Villa will be awarded 0.53 points for a defeat? Nope. It’s because the Hammers have five games remaining at a white elephant of a home stadium which has seen them win just two of their last 11 games.

This is like manna from heaven to football websites on a night when the name of two-goal Kai Havertz is trending. But it’s basically nonsense.

First because Jens Nowotny says that Havertz is already “on the way to becoming a world-class player” and puts no condition on this development.

Second because Jens Nowotny says “you need coaches like Jurgen Klopp, Pep Guardiola or Jose Mourinho, who can take him further” and then qualifies it by saying that “such a coach also has to work for a club where he is allowed to develop”. Options and caveats.

And third because Jens Nowotny basically concludes that he should probably stay at Bayer Leverkusen for another season and then join Borussia Dortmund.

As an example of the ridiculousness of football journalism in 2020, the Mirror has taken the exact same quotes and decided that ‘Kai Havertz has been warned to consider his next move carefully and be prepared to snub Liverpool if they cannot offer him first-team football’. And the Liverpool Echo report a ‘Kai Havertz blow’, because Kai Havertz always does exactly as instructed by Jens Nowotny; he’s famous for it.

What a difference a few hours (and some perspective) makes…

Public service announcement
We feel it is our civic duty to inform readers of The Sun website that there are much better things to w*nk over on the internet than the MOST READ IN FOOTBALL article ‘Peter Schmeichel, Ian Rush, David Ginola and Neil Ruddock are retired footballers who scored with younger Wags’. Or ‘women’ as we like to call them in 2020.

‘Not one to judge, SunSport explores the relationships of seven former players.

‘From Neil “Razor” Ruddock to the debonair Thierry Henry, these chaps clearly feel young at heart.

‘But who are their other half’s and what’s the age gap?’

Well we are ones to judge, so what the f*ck is that apostrophe doing there?