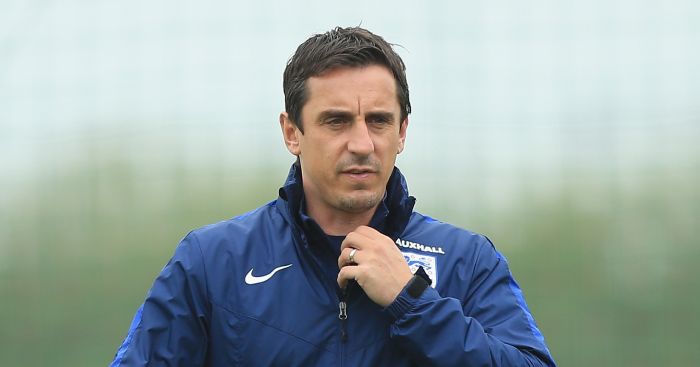 Gary Neville launched into a scathing attack on Arsenal during their 3-0 defeat to Manchester City in the Carabao Cup final.

Arsenal were brushed aside with ease at Wembley as Premier League leaders City picked up the first piece of silverware of the season.

You should read 16 Conclusions on the match, which briefly covered one of Neville’s most cutting comments.

During Sky Sports’ coverage of the final the camera centered on a young Arsenal fan crying in the stands, to which Neville, on co-commentary, said: “And look at that, that’s what you cause.”

As 16 Conclusions said, that moment ‘must form part of the montage when Wenger does eventually leave’.

But Neville was on top form throughout, obliterating Arsenal for their complete non-performance – just as he did after the Gunners were thrashed by Liverpool in August.

The pundit was simmering all game, but David Silva’s goal – City’s third – sent him over the edge.

“Ramsey. Xhaka. Ozil. You’re walking on a football pitch at Wembley. Why are you walking? You’re a disgrace. An absolute disgrace.

“I don’t even want to talk about them because they’ve been an absolute disgrace. Ramsey and Xhaka walking on a football pitch. Absolutely spineless.

“City have played properly, that’s all they had to do, to walk through this Arsenal team. The precision that you expect from this Man City team was there.

“I have to say, I’m struggling to come up with words now to describe this Arsenal pattern, this engrained, embedded pattern that we’ve seen.

“It’s not even a team that plays good football. Liverpool play better, Tottenham play better, Manchester City play better. There are three or four teams that play better football than them now.

“Chelsea and United are stronger both physically and mentally.

“Look at the Man City players sprinting back while the Arsenal players walk back. A complete difference in mentality.

“It’s not easy to win a cup final this easily, but that’s what City are about to do. Arsenal have been absolutely pathetic.”