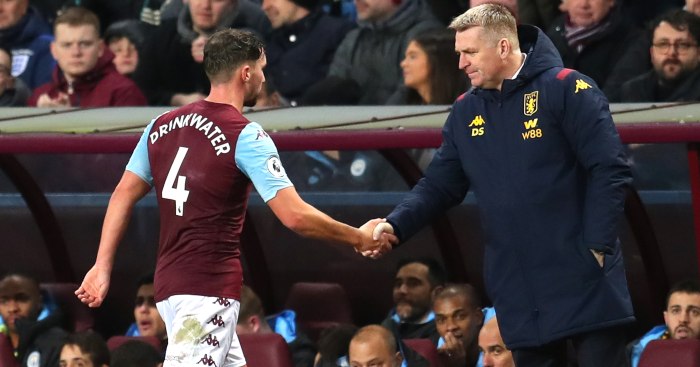 There is rarely great shame in losing to the champions and being without three-quarters of their spine offers Aston Villa some mitigation. But the manner of their capitulation to Manchester City leaves Dean Smith searching for signs of life within his squad for the second time in less than a fortnight.

The Villa boss admitted that going down 3-0 to a 10-man Watford side in the final match of 2019 prompted him to tear into his players in the hope of provoking them to arrest a desperate slump which saw them lose five out of six games. The result was a much-improved performance at Burnley in their last Premier League outing on New Year’s Day – but that was it. Today, City put on a clinic but Villa were far too willing to sit back and observe.

Pep Guardiola’s men have made mugs of many sides better than Smith’s but the hosts’ passiveness back at Villa Park after four games on the road is the fault that will most infuriate the manager as he sifts through the wreckage of this defeat. Despite his Villa heritage and success in dragging his boyhood club back into the Premier League, doubts have crept in on the Holte End over Smith’s suitability to keep them there. This embarrassment will only heighten those concerns.

Where does Smith go now? The manager could read the riot act once more but following on so quickly after the last one, it is unlikely to have a similar effect. This time, Smith may opt for his carrot rather than reach for his stick. The defeat at Watford could be attributed to an effort deficit. Against City, it was talent that told, even if the champions out-fought and out-thought their hosts far too easily.

His next move should be in the transfer market before the trip to Brighton given Villa’s appalling luck with injuries of late. Smith was without his first-choice goalkeeper, central midfielder and centre-forward and though cover has been acquired for £50million-rated John McGinn, one-time £40million international Danny Drinkwater showed nothing against City to suggest he can fill the Scotland star’s boots.

Indeed, Drinkwater was as far off the pace as you might fear for a midfielder making only his second Premier League appearance since March 2018. He was strolled past by Riyad Mahrez for City’s opener; robbed by Gabriel Jesus for the second; turned by Kevin De Bruyne for the third; and left choking on the Belgian’s dust for the fourth, all before half-time.

Drinkwater’s spell at Burnley was memorable only for a fight outside a Manchester nightclub after he attempted to hit on another footballer’s girlfriend. He got little more action in the Clarets’ midfield, making only a single Premier League start while Sean Dyche stuck with Jack Cork and Ashley Westwood. If Suso, Villa’s transfer guru, really believes Dyche and three Chelsea managers have all been wrong about Drinkwater, it seems he has hopelessly misjudged the situation.

Have to say it's such a poor call to play Drinkwater in this game. That said, all three central midfielders have been woeful defensively. Always ahead of their man as if they aren't aware Man City are pretty decent when they get in behind a midfield

Drinkwater was not the only villain in the hosts’ half-arsed efforts to defend their goal. A back three worked at Burnley a fortnight ago. Here, it caved under the weight of City’s relentlessness and their own incompetence.

Having gift-wrapped Leicester a leveller in their Carabao Cup semi-final, Villa’s defence was again in generous mood. The back three, featuring Tyrone Mings flanked by inexperienced duo Kortney Hause and Ezri Konsa, seemed never to know when to press or when to drop. Drinkwater was in no position to criticise but even he was entitled to ask why all three retreated towards their own goal when Sergio Aguero was lining up his first goal in a record-breaking hat-trick.

We learned nothing from Villa’s attack we did not already know when the team-sheets dropped, or even after Wesley’s season-ending injury at Burnley. Suso must source a striker capable of hitting the ground running since Villa at present do not have a senior centre-forward worthy of the title. Anwar El Ghazi played through the middle with Jack Grealish in what we can only assume was Smith’s way of telling the Villa hierarchy to get a shift on.

Pepe Reina was in the crowd before he completes a loan switch from AC Milan, assuming the former Spain keeper doesn’t get cold feet. But Villa have so much more to do this month, perhaps more than any other Premier League side. Without an experienced centre-back, another midfielder and a goalscorer as a minimum, the Villans face an uphill battle to escape the bottom three.