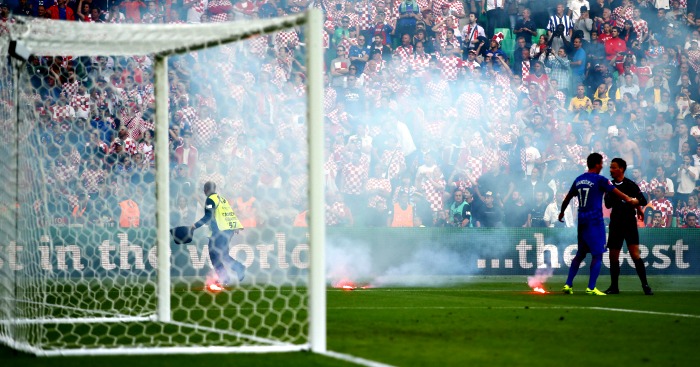 Croatia boss Ante Cacic has slammed the country’s fans who caused their game with the Czech Republic to be stopped.

Flares were thrown on the pitch and fighting broke out in the Croatian end during their 2-2 Group D draw with the Czech Republic – leaving them likely to face UEFA sanctions.

Referee Mark Clattenburg was forced to stop the game with four minutes left while a steward was almost hit by a firecracker, along with Croatia goalscorer Ivan Perisic.

It forced 10 minutes of stoppage time, allowing Tomas Nedic to score a late penalty and snatch an unlikely draw after the Czech Republic were outplayed for 75 minutes.

Russia already risk being thrown out of the tournament after being handed a suspended disqualification following disturbances inside the Stade Velodrome in Marseille during their 1-1 draw with England on Saturday and Croatia – already facing disciplinary action over disturbances during their opener against Turkey – could face the same threat.

Cacic told a press conference: “These people are really scary, that is why I call them hooligans. These are not really Croatian supporters. These are sports terrorists. The main thing our country doesn’t want to mess with this kind of hooligans.

“This is maybe just a question about six to 10 individuals. I hope they can be identified and punished. I hope the Croatia FA is doing everything to prevent this but it is impossible to avoid.

“Ninety-five percent of our supporters are ashamed in front of Europe, the players are very sad that after playing a beautiful match this happens.”

Barcelona midfielder Ivan Rakitic fears they will be thrown out of Euro 2016 after crowd trouble.

“We have to see if we will play against Spain, maybe they will send us home after this,” he told HTV.

“There are a lot more fans that love the national team and they will not be able to see Croatia play.

“It is hard to say, but we feel more comfortable playing away… we were lucky that the match went on, the referee wanted to end it immediately.”

The Czech Republic rarely looked like recovering after Perisic and Rakitic put Croatia 2-0 ahead but Milan Skoda’s 75th-minute header and Nedic’s stoppage-time penalty rescued a point.

Goalkeeper Petr Cech told UEFA.com: “When you are 2-0 down against a great team your chances are getting slimmer every minute but we managed to dig deep to get back in to the game. It’s a good result at the end. We have a point and we have everything in our hands for the last game.”