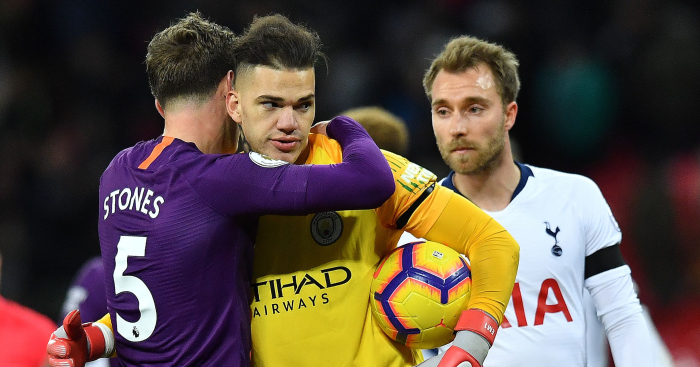 1) Perhaps only one conclusion is needed and we can all move on and forget a forgettable game. The only thing we will all remember about that Monday night anti-extravaganza was the excellence of Moussa Sissoko. And that tells you everything you need to know about Tottenham’s lack of creativity and Manchester City’s unpunished vulnerability. City looked beatable and yet never looked in danger of being beaten by this not-quite Spurs side.

This was not the unstoppable force meeting the immovable object but a stoppable force falling over its feet but still somehow sliding inexorably on…probably all the way to another Premier League title.

2) The Manchester City defensive statistics are damned impressive. They have kept clean sheets in two-thirds of their games this season despite playing Arsenal, Liverpool and now Tottenham away from home. They have conceded only three goals in ten Premier League matches but – most extraordinarily – they have allowed only 17 shots on target in those games. On paper, they are a defensive force. On an admittedly rotten Wembley pitch, they looked decidedly shaky.

That Tottenham conjured just one shot on target – and that as early as the tenth minute – owed rather more to Tottenham’s staccato attack, poor decision-making and some excellent goalkeeping than defensive solidity. In truth, Bernard Mendy was a liability, Kyle Walker looked like the impetuous full-back of the pre-Pep years and Aymeric Laporte and John Stones both made errors that would have allowed a better team to score.

3) The full-backs on both sides were preposterously bad. Their incompetence was summed up by the only goal of the game and one of Tottenham’s two dangerous forays forward during a frustrating hour’s football when they did not muster a single shot.

That City’s goal was made by Raheem Sterling and finished by Riyad Mahrez immediately turns the spotlight on the two Tottenham full-backs, even before you see Kieran Trippier’s poorly timed attempt to clear Ederson’s long ball and Ben Davies’ bizarre decision to allow City’s Algerian winger to get goal-side. The commentators praised the goalscorer’s lung-busting run, but in reality he could have stopped to tie his shoelaces and Tottenham’s Welsh full-back would have still allowed him to meet Sterling’s cut-back. And Trippier would have probably been just as easily fooled by a fifth change of pace from Sterling as he was by the second and third.

4) At the other end, Mendy was guilty of child-like half-assedness when he let the ball run under his foot to allow Sissoko to run into acres of space, with oodles of time to pick out a teammate. It was the first of about 17 lapses by Mendy, sending Liverpool fans into pirouettes of joy because some people on the internet had once said that Mendy was better than Andy Robertson. Oh to watch every game through red (or blue or white) glasses. Some fans could do 16 Liverpool or Manchester United conclusions from games not involving either Liverpool or Manchester United.

5) That one massive full-back error was punished and another was not is a fair summary of this game and the over-arching tale of these two teams. Trippier made a heinous error but Sterling was sublime in taking advantage, speeding up, slowing down and then speeding up again before perfectly picking out the onrushing Mahrez in a perfect copy of about 42 other City goals over the last 18 months.

Meanwhile, the two Tottenham centre-halves were struggling for position – Gary Neville correctly pointed out at half-time that they should have been covering behind their full-back when he was in a one-on-one battle – and there was no sign of Eric Dier. There was little sign of Eric Dier all night.

6) The contrast with that Spurs chance is too delicious not to dwell upon. First, the difference between the quality of the attacking player. Where Sterling was calm in a moment that he had already played hundreds of times in training, Sissoko was hesitant. There was no change of pace – just a powerful run, a near-stop and then the wrong ball.

Still, the wrong ball might have still been the right ball if City did not have Fernandinho. We have long since run out of superlatives to describe a player who not only expertly sniffs out danger but has a speed of thought and movement that simultaneously reflects and belies his age.

7) That’s not to say that Sissoko was poor. Far from it. For all the pre-match consternation that Sissoko was playing while Harry Winks, Christian Eriksen and Dele Alli was on the bench, this was undoubtedly the right call from Mauricio Pochettino. On that pitch, against that opposition, the incredible effort and energy of the Frenchman was more valuable than Tottenham’s more talented but more fragile alternatives.

There were times when his willingness to run with directness, strength and pace reminded you of the Sissoko who made himself so valuable for Didier Deschamps at Euro 2016. This was the best of Sissoko in a Tottenham shirt. He worried Mendy and he worried the recently unruffled Aymeric Laporte. 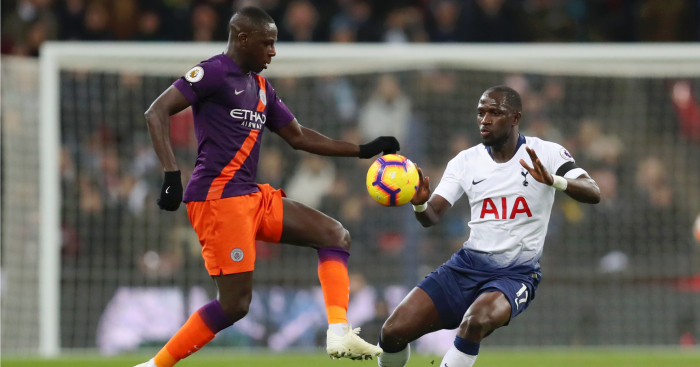 8) It was a mistake from Laporte that gave Spurs their second big opening of the game, but this time City’s saviour was not Fernandinho but the magnificent Ederson. Against perhaps 18 or 19 of the Premier League’s goalkeepers, Harry Kane would have scored with one of his few first-half touches when put through by Erik Lamela.

But Ederson is different. It wasn’t just the speed of thought and feet that was impressive but his absolute certainty that he would a) stop Kane and b) not concede a penalty. He took all of the ball and all of the man while Kane was still wondering whether to lift the ball over or across the keeper. It was magnificent and deserves to be remembered like an acrobatic bicycle kick. 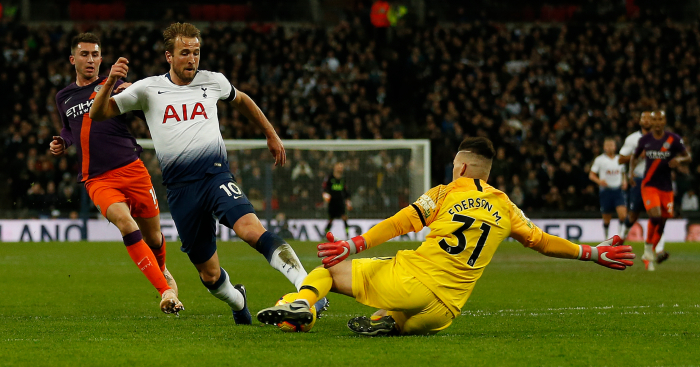 Their passing and movement seemed to entirely befuddle Tottenham – Davinson Sanchez repeatedly following Sergio Aguero into midfield was just one symptom of their confusion – and on another day (a better day for City) it might have been closer to the 4-1 scoreline we have seen before.

When Mahrez forced an excellent save from Hugo Lloris, it was worth pausing the action to count the Spurs players in their own box. Nine. It’s little wonder that they required City’s generosity to create chances.

10) It was an excellent night for Mahrez, who proved his worth not just with a goal and a near-goal but with his work in tandem with Bernardo Silva both in possession and out. Before the start of this season, would we have foreseen Sterling, Mahrez and B Silva all starting a key away game for Manchester City? Logic suggested they were all fighting for one place on the right wing. But logic has no place in this excellent City side. Sometimes I idly wonder if they could still mount a title challenge if they all drew their positions out of a hat at the start of every game.

#thfc Spurs fans sing Moussa Sissoko's name as he brings the ball down in the middle, drives forward and wins a free kick. Now he gets back to cut out a cross in his own box. Probably Spurs' best player.

12) Manchester City really should have had the game won by the time Pochettino decided that Sissoko needed some help in midfield. First Lloris gifted the ball to Aguero and got away with it. Then Toby Alderweireld was caught napping by Bernardo Silva and got away with it, David Silva getting the ball caught in his feet for the split second it took him to bizarrely try to set up Sterling instead of shooting himself. Then Aguero blazed over one of those chances that the fans were already celebrating.

13) Having survived all those chances, Pochettino looked to his bench for change. That he eschewed Eriksen and Alli in favour of Winks is telling. There was little point adding creativity until Spurs could wrest a modicum of control from City, and the hooked Dier was offering neither control nor protection. Winks made an immediate impact; suddenly Spurs looked capable of moving between the lines, of looking for gaps rather than waiting for mistakes. For all the talk of the Wembley pitch, Winks’ touch was exemplary.

By the time he was joined by Alli, Tottenham were starting to believe that they could wrest a point from this game. Unfortunately, the pitch had other ideas; the ball from Alli was perfect but the finish from Lamela was hindered and the Argentine could only offer the inevitable ‘what the f*** was that?’ gesture towards the ground as explanation.

14) This is not how City are supposed to win football matches, in a panic perfectly represented by Walker needlessly giving away a corner in the 94th minute. Control had gone. Shape had disappeared. Calm was in short supply. But thankfully for them, this is far from a brilliant Tottenham side. Perhaps a year ago, Spurs would have won this game, but a World Cup and no summer transfer activity has taken its toll. Too many players have gone backwards while Tottenham have stood still.

15) “The circumstances of the pitch was the same for both sides,” said Pochettino and that really should be the end of that. The spectacle was not great, the quality was not so high, but it was not even close to being unfair. There are those wringing hands as if somebody should pay for making us watch two good teams on a shit pitch, but those people are as tiresome as all the jokes about touchdowns and rushing statistics.

Pochettino was right to instead praise his team for being competitive, even if it must stick in the craw that he can only really be competitive and not truly compete with Manchester City. If Real Madrid are really an option, then objectively he really should take that option.

16) Manchester City will have far, far better days. But if a pretty good team cannot beat them on one of their sloppiest days, it’s incredibly difficult to see them ultimately falling short. No wonder Pep Guardiola called it a “great victory”. He knows when he has used up a life.