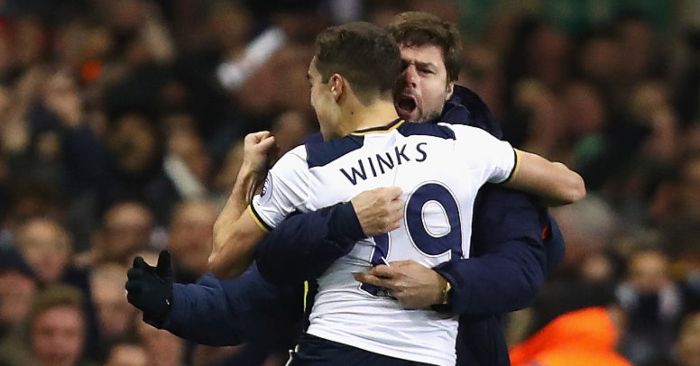 The dry, dispassionate analysis can wait. Most of it actually writes itself. The post-mortems will reference a lack of spending, perhaps one too of ambition, and a playing staff who forgot where they came from.

That will be the diagnosis of what went wrong between Tottenham and Mauricio Pochettino and it can’t be disputed. Ultimately, how the blame is apportioned is irrelevant. It’s done. It’s over. It’s finished.

This was coming, though, and there was a moment during the bitter prelude which recalled better times at Tottenham. It was on Sunday night in Kosovo, when Harry Winks scored his first England goal, before running away with that big smile on his face.

It came almost exactly three years after his first Premier League start for Spurs, in a 3-2 win over West Ham at White Hart Lane in November 2016. A game in which he also scored his first senior goal.

It’s gone now, of course, but that ground really did have a great pressbox. It was tucked in right behind the home technical area and below the pitch’s camber. As a view it was actually useless, like peering across a busy tabletop, but as a sensory experience it was unrivalled. It was magic.

Particularly on evenings like that, with the crowd’s weight bearing down, the managers howling their instructions into the winter air and the grass glinting under the floodlights. Football at night is so sharp. The colours are all vivid and bright and everything seems to matter just a little bit more. As it did against West Ham. When Harry Kane scored a late equaliser the ground shook. When he converted the winning penalty with almost the last kick those rickety tiers rocked again.

It was a back and forth game, full of clumsy urgency and alive with that special derby anxiety. West Ham, Spurs, West Ham, Spurs. Mockery and schadenfreude. Penalty, Spurs and then – finally – Kane.

And earlier on, Winks.

When he scored, he didn’t know how to react. He was a Tottenham supporter as a boy and had probably been dreaming of that moment all his life. When it arrived, it was much, much too big for him. Watch the replay and you can see that. He tries to do all the celebrations at once, just in case he never gets the chance again. He grabs his shirt, pumps his fists, and then just starts running towards Pochettino with this look of wild, uninhibited joy.

It was so authentic and affecting. Like seeing a son run to his father. It also happened right in my eyeline. Pochettino spilled out of the technical area, then left across the front of the pressbox and down the touchline. When Winks got to him, he just jumped into his arms before, within seconds, the two of them were consumed by a joyous knot of players and coaches.

The reporters are better placed to describe Pochettino’s press conferences and say whether they found him compelling in person. I didn’t, really. His English was always slightly fractured and he only seemed to break character when he had an axe to grind or a complaint to make. Last season, during Vincent Janssen’s wilderness months, Football.London’s Alasdair Gold gently began a question about whether, with Kane injured and Dele Alli unavailable, the exiled forward might return out of necessity. Pochettino didn’t even let him finish, cutting him off sharply. It was angry and weird and so, yes, he could be a bit moody.

But when he was asked about Winks that night, back in 2016, off he went. It had been a really cold evening and the journalists were bunkered into the auditorium in heavy coats and scarves.

Who remembers the detail of what Pochettino said, but the pitch and tone of his voice remains really clear. He glowed. His eyes danced as he spoke. He was so proud. Winks’ goal – his performance in general – seemed to matter more to him than winning the game. He just kept talking and talking and talking. It was an incredibly warming moment.

And that seems relevant now because, hopefully, those anecdotes partially capture the side of Pochettino that a lot of Tottenham fans gravitated towards. They loved him for the football, of course they did, and who he is as a person wouldn’t have mattered as much without the Champions League qualifications and the tangible progress. Nevertheless, what will make this such a heavy blow for the fans to absorb is the loss of this human texture.

Football is now a lifeless and sterile game and, within that, Spurs are a typically cynical club. Their one common, public element over these past two decades has been Daniel Levy, who is hardly personable. In fact, he comes across as awkward and bloodless, and as a viper of a businessman who, according to legend, would sell his own children for a fistful of silver.

Pochettino was the humanity in that situation, then. Perhaps why that Winks moment endures is because it was such a vivid display of something that, at heart, most fans want to be able to recognise in their clubs but, generally, are unable to find: Soul, love, warmth. Maybe that’s too pithy, too saccharine and idealised. But however those ethereal qualities are termed, they describe exactly – precisely – what has now been vented away.

Whatever the justification is for that, whatever Levy’s next move may be (we know it now), Tottenham are a colder, harder and less likeable club as a result. They are something that, today at least, even their own fans can’t love.