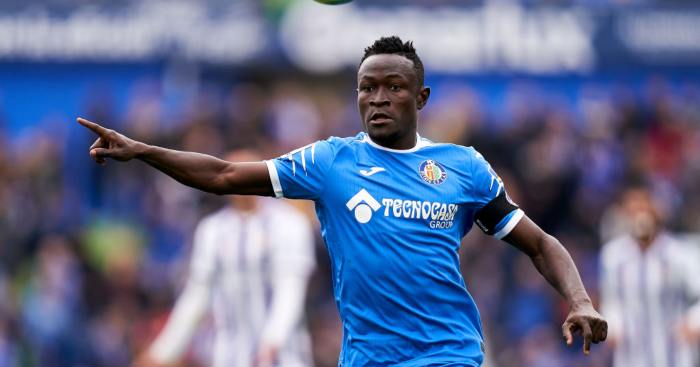 Getafe have reportedly made a Tottenham and Arsenal centre-half target available for £22m in a possible boost for both club’s transfer aspirations.

Jose Mourinho and Mikel Arteta are both looking at defender Djene Dakonam as an option to bolster their leaky defences and it would appear that the 28-year-old could move this month.

The Togo international, who is more commonly known by just his first name, has forged a reputation as one of LaLiga’s top defensive stars and has been named in the Spanish top-flight’s Team of the Year for the past couple of campaigns.

Djene was accompanied by Sergio Ramos and Gerard Pique in those composite teams of LaLiga’s best players and has the game to thrive in the Premier League.

Tottenham are looking to sign a new centre-back, with Jan Vertonghen out of contract this summer, while Juan Foyth has also been tipped to leave and Mourinho has some concerns over the nervy performances of former record signing Davinson Sanchez.

Arsenal, meanwhile, have struggled to find a solid partnership all season, with David Luiz, Sokratis Papastathopoulos and Shkodran Mustafi all struggling at different points of the campaign.

The Sun reports that Getafe rate Djene around the £22m mark and are holding firm on that figure as clubs circle during the January transfer window.

Ligue 1 outfit Monaco are reported to have a bid just shy of £13m knocked back by Getafe chiefs, who will be hoping Arsenal and Tottenham’s interest can spark a bidding war.