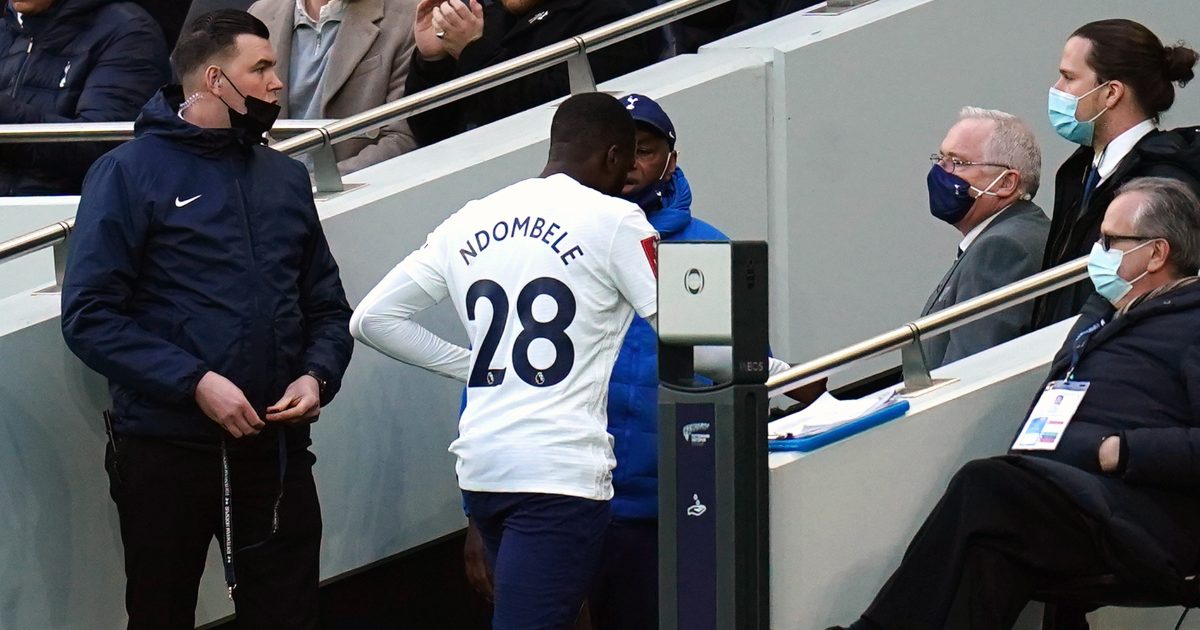 Antonio Conte was coy when asked about Tanguy Ndombele’s future after the midfielder was booed off by Tottenham fans during their FA Cup third round tie against Morecambe.

Ndombele – who is Spurs’ record-signing – angered fans when he took his time leaving the field. He was subbed off with 20 minutes to go when Tottenham were 1-0 down.

The Frenchman appeared to walk slower when he heard the boos. He then walked straight down the tunnel as he missed his side’s late fight back.

Anthony O’Connor had put the League One outfit on course for a famous victory in the first half but goals from Harry Winks, Lucas Moura and Harry Kane sent Conte’s side through to a fourth-round tie with Brighton.

Ndombele’s behaviour and future was the subject of Conte’s post-match press conference, but the Italian did not want to say too much.

Conte said of the fans’ reaction: “I was so focused on the game because we were losing 1-0. This type of situation, they are in football.

“You have to be good to try to change your opinion. If someone is disappointed with you. It’s normal.

“I was a player and it happened sometimes to me that someone was unhappy with my performance. This is our life. I repeat, it’s OK. We have to continue to work and try to be better next time.

“We have to know very well that if we perform well, the fans are happy.

“If you don’t perform well, the fans are not happy. This is football. If we think the fans have to be happy any time, if you win or lose, I think that’s not right.

Fair play to Morecambe for a great cup tie. In that hat for the next round which is the most important thing. 💪 pic.twitter.com/3dRsIgrolf

“In this case, I decided to give a bit of rest to Harry and also Lucas. At one point, when I’ve seen the situation we should change the situation, for sure.

“When you have this type of player on the bench, for sure, the expectation is to change the game.

“It’s not only for this game, it’s our life, the normal life of the coach. If the team is playing and then on the bench you turn your head and you can see top players then you change the game.”

Morecambe, 59 places below Spurs on the football ladder, can take pride in their effort, especially after manager Stephen Robinson was absent due to a positive coronavirus case.

Assistant manager Diarmuid O’Carroll, who was only promoted from a first-team coach role on Tuesday, said he had mixed feelings.

“We are coming to a fantastic facility like this, they look at us like little Morecambe, probably the lowest budget in League One,” he said.

“I think the system and the tactics the gaffer set out for the players made it a very frustrating afternoon for Tottenham, having to call on the big boys at the end.

“We are always frustrated to lose games, but we are picking holes in what is a very good performance for us for a club.

“We are perfectionists, we want to win every game, we are leading, individual mistakes in the goals, the boys will be disappointed. But I can’t fault them and I was proud to lead them out in the gaffer’s absence.

“I did enjoy it, I didn’t for the last 15 minutes when Kane and Moura are kicking it about.

“But for 75 minutes it is a fantastic day for me. I will remember it, it is a big day for me and for my family. It would be sweeter if we could have got the victory or pushed them to extra time.”