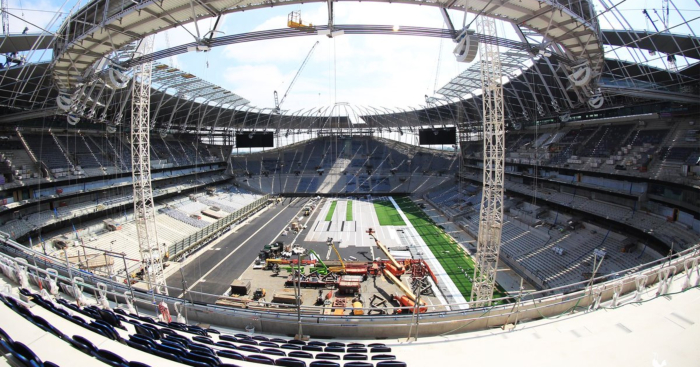 Tottenham could have three homes this season after applying for permission to play their Carabao Cup third round tie with Watford in Milton Keynes.

The ongoing construction of Spurs’ White Hart Lane stadium and the heavyweight title fight between Anthony Joshua and Alexander Povetkin on September 22 at Wembley means Tottenham have asked to stage their game at MK Dons’ Stadium MK.

Round three ties are scheduled to take place week commencing September 24 and Spurs did not wish to reverse the draw, made on Thursday evening. The request will be considered at the EFL board meeting on September 6.

Spurs said in a statement: “We have applied to the EFL board for special dispensation to play this tie at Stadium MK.

“We appreciate that Stadium MK may not be an ideal destination for every fan to get to on a weekday evening.

“However, the club felt it would not be beneficial to request a reverse of the fixture as it would have resulted in no more than a 10 per cent allocation of tickets for our supporters at the venue of our opponents.

“In contrast, we shall have a ticket allocation of up to 90 per cent at a neutral venue, ensuring greater access for our fans.”

Stadium MK has a capacity of 30,500 and is 50 miles from White Hart Lane. Milton Keynes Central train station is a 30-minute journey from London Euston.

Spurs say they sought a venue within the M25, but said it was “simply not possible”.

Tottenham were tenants of Wembley last season and had hoped to return to White Hart Lane, and their new stadium, this season. But the move has been delayed over safety concerns.

Spurs added: “We are extremely conscious of having to ask our supporters to attend home matches at more than one venue and apologise for any inconvenience this may cause.”