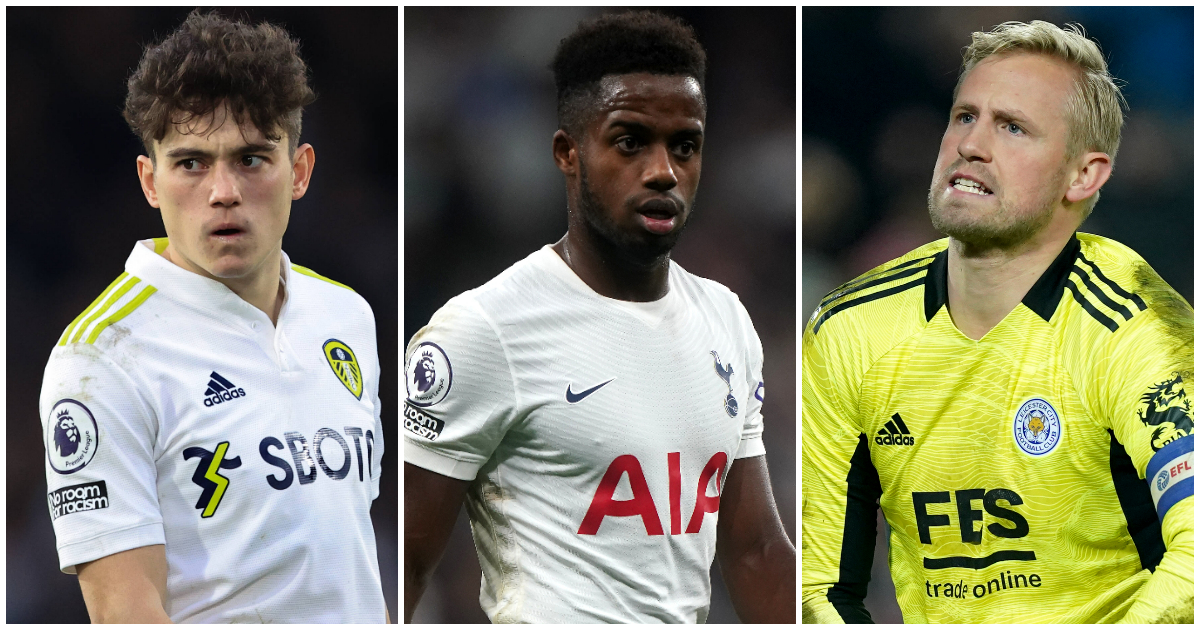 Ryan Sessegnon was scapegoated somewhat for Spurs’ being crap but he will struggle to argue that he didn’t deserve the hook. Mateusz Klich suffered a similar fate as one of two Leeds players to feature here…

The Premier League’s worst XI of the weekend, according according to Whoscored ratings…

Kasper Schmeichel (Leicester) – 5.74
No glaring errors from the Leicester keeper in their 2-2 draw with West Ham, unlike Emi Martinez (5.81) who suffered a rush of blood to the head when he charged out of his box at Newcastle which almost saw Tyrone Mings put through his own goal. But the fact West Ham scored with two of their three shots on target has hurt Schmeichel’s score. The Denmark stopper might have come for the Hammers’ late corner too, which Craig Dawson headed (sort of) in from four yards out.

Caglar Soyuncu (Leicester) – 5.93
Leicester showed a slight defensive improvement, yet they were still breached from a set-piece and a simple ball over the top, for which Soyuncu had pushed up while his team-mates stayed at home. Looked shaky early on and struggled to regain his composure.

Ben Gibson (Norwich City) – 5.71
Left dizzy by the runs of Bernardo Silva and Phil Foden, which may explain why he lost Foden then failed to clear when City scramble home their second goal. Hardly the first centre-back to be put into a spin by City’s relentlessness.

Aaron Cresswell (West Ham) – 5.78
It wasn’t a great weekend for the Premier League’s left-backs. Cresswell is joined by Hassane Kamara, James Justin and Lucas Digne in scoring under 6, as did Ryan Sessegnon. More on him in a bit. Cresswell’s carelessness earns the lowest score of the lot, with none of his six crosses finding a team-mate and nor did either of his two long balls. In total, he gave the ball back to Leicester 16 times.

Vladimir Coufal (West Ham) – 6.17
In contrast, the right-backs fared rather well this weekend, with none scoring under 6/10 or lower than Coufal, even if Matty Cash pushed him close (6.19). Coufal gave the ball away even more often than Cresswell, losing possession 20 times in 67 minutes before his number was up.

Kenny McClean (Norwich) – 5.89
None of Norwich’s midfielders covered themselves in glory, with Pierre Lees-Melou earning a 5.99 before he was hooked on the hour. McLean similarly struggled to get a grip of the engine room while being swamped by white City shirts. The 30-year-old lost five of his seven ground duels and was dribbled past four times.

Mateusz Klich (Leeds United) – 5.80
The Leeds midfielder struggled badly in the deeper role in the continued absence of Kalvin Phillips, losing possession nine times in 45 minutes while Everton rang rings around him before he was dragged off by Marcelo Bielsa alongside Raphinha.

Dan James (Leeds United) – 5.8
Like Klich, James is having to take one for the team while Leeds wait for Patrick Bamford to heal and despite a couple of goals against Villa in midweek, it was apparent once more at Goodison Park that the summer signing from Manchester United struggles in a central role. So much so that Bielsa moved him away at the break, preferring Tyler Roberts to run around a bit up front.

Ryan Sessegnon (Tottenham) – 5.84
Antonio Conte took even more decisive action than Bielsa, moving Sessegnon from the pitch to next to him on the bench after only 28 minutes, which was enough time for Wolves to open up a two-goal lead while overrunning the Spurs midfield. Sessegnon was the very visible fall guy for Tottenham’s struggles, and Conte’s ruthlessness raised a few eyebrows among the home support, but the youngster was sloppy in the time he was allowed, with only six of his 11 passes finding a team-mate, losing possession with a third of his 15 touches.

Ollie Watkins (Aston Villa) – 5.79
The Villa striker has toiled so far this season, which is why he really needed a ridiculously narrow offside call to go his way when he thought he had levelled in the second half at Newcastle. It did not. Watkins was due to be replaced before his disallowed tap-in and his glimpse of goal bought him only another 10 minutes before Danny Ings was given a run. Which may be the shape of things to come for Villa’s forward line.

Teemu Pukki (Norwich) – 5.85
The Norwich striker finished the 4-0 defeat with the best passing accuracy of any Norwich player (90.9 per cent) but there were only 11 of them among 19 touches in 90 minutes. Which is not entirely Pukki’s fault given he was left isolated by his team-mates while they struggled to get to grips with the champions and runaway leaders.