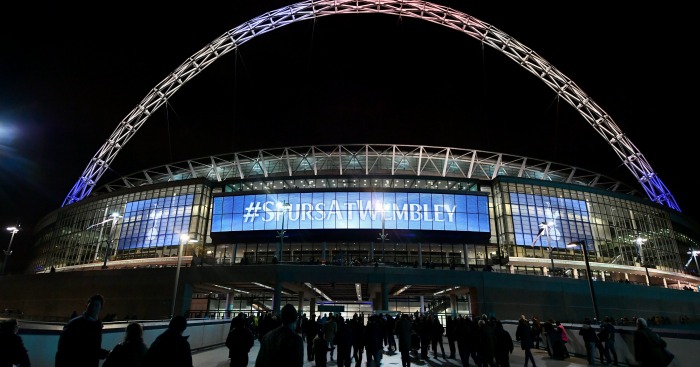 Tottenham moved one step closer to playing home games at Wembley next season after their application to host 27 matches at the stadium’s full 90,000 capacity was approved.

Brent Council’s planning committee voted in favour of the proposal by a majority of five to one following a heated meeting, lasting three hours and 32 minutes and during which frustrated local residents were allowed to air their views.

Spurs now have until March 31 to activate their option to play at the national stadium, which has already been agreed with the Football Association.

The club, however, are likely to use all their available time to decide, as they assess whether their new stadium next to White Hart Lane will be completed in time for the start of the 2018-19 season.

Tottenham could yet stay at their current ground next season and play home games at Wembley in 2018-19, before moving into the new stadium for the 2019-20 campaign.

One resident broke down in tears midway through the debate at Brent’s Civic Centre while representations made by Tottenham’s executive director Donna Cullen and Wembley operations manager Chris Bryant were regularly interrupted by heckling.

Wembley’s current regulations meant Spurs could play any number of games there with the upper tier left empty, but this would mean a restricted capacity of 50,835.

The club were desperate, therefore, to be granted the full 90,000 for all their games and avoid the dampening effect on atmosphere involved in playing in a half-empty stadium.

Cullen said: “Brent is the proud home of Wembley but we would need to make it our proud home here.

“We would need to create a vibrant home advantage in the stadium. The impact of support is well-acknowledged, hence our application tonight for full capacity.”

But the issue of full capacity proved particularly contentious with objectors, who expressed concerns about anti-social behaviour, the extra strain on transport and the negative impact on local businesses.

Transport expert and local resident Fatema Karim-Khaku said Tottenham’s concerns about the atmosphere at matches “was not a material planning consideration and should not be considered by the committee”.

Councillor and non-member Sam Stopp, a Spurs supporter himself, said the residents’ well-being should come first.

“While in my heart I would love to see Spurs play at Wembley, I cannot do anything but implore you to take the alternative decision,” Stopp said.

“There is also a danger Wembley ends up simply being treated like a cash cow, and a cash cow the residents of Brent don’t actually receive any benefit from.”

The frustrations of the objectors fell on deaf ears, however.

At least two councillors appeared to favour approving the proposal but only on the condition that the capacity be reduced from 90,000. A compromise option of 61,000 – the capacity at Tottenham’s new stadium – was suggested.

It was decided, however, that to propose a new figure, more analysis would be required and a deferral was not an option.

Councillor Barbara Pitruzzella was the only one to vote against the proposal while Councillor Michael Maurice approved, although admitted to feeling “between a rock and a hard place”.

If Tottenham host more than 27 matches next season, in theory the extra games could only be played to the reduced attendance of 50,835.

Bryant, however, suggested Spurs could yet play even those fixtures at full capacity.

“We would look to absorb those matches into the existing Wembley calendar,” Bryant said. “Spurs will be made the priority.”