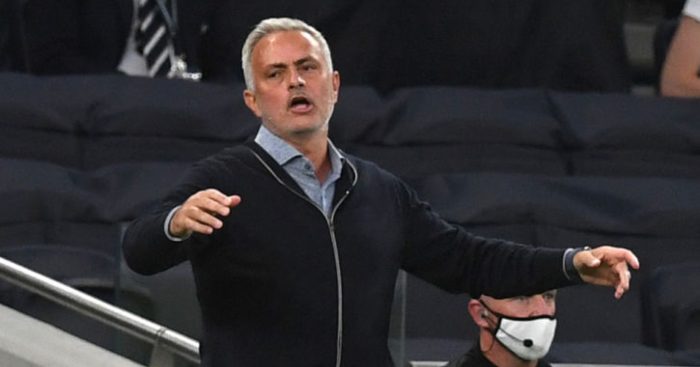 Spurs boss Jose Mourinho has denied reports of a rift between him and midfielder Tanguy Ndombele.

The France midfielder, who Mourinho met during lockdown to help install his GPS equipment, has not played in either of Tottenham’s two games of the Premier League restart.

He did not even warm-up during the 2-0 win over West Ham, which came thanks to a Tomas Soucek own goal and Harry Kane’s 137th goal in 200 league appearances for the club.

Reports emerged in France not long after full-time that Ndombele had told Mourinho he no longer wanted to play for Spurs, but Mourinho has quashed them.

He said: “No. On the bench was Tanguy, (Ryan) Sessegnon, Toby (Alderweireld), (Jan) Vertonghen, Gedson (Fernandes) and they didn’t play.

“That’s football. For me there’s nothing. I had attacking players on the bench, Lamela and Bergwijn. Two great players to bring on and then Winks to give us more consistency.

“This situation of the five changes, some people maybe think that you have to use all five changes. You don’t have to do it. You have the chances to do it.

“I felt that the team was fine. I never believed that 2-0 was a completely safe result because they were trying everything and one goal could change the state of mind and give them the motivation in the final minutes so I decided to keep the team stable and three changes was enough.

While Ndombele, Spurs’ record signing, is struggling for minutes, that is not a problem for Kane, who shirked off scrutiny over his performance against Manchester United on Friday with a trademark goal, coolly slotting past Lukasz Fabianski.

Mourinho was forced to make an impassioned rebuttal of claims that his style of play would not see Kane score goals before the match, listing the scoring records of all of his former strikers.

But there is little chance of Kane not scoring whatever the tactics and Mourinho’s pre-match prediction came true.

“I said before the game I wouldn’t be surprised if Harry Kane scores,” he said.

“Is that fundamental for me? No. It is fundamental for the team. 2-0 killed the game. It’s good for Harry, of course it is because strikers, their happiness comes from team victories but also from numbers and goals they score.

“It was very good for him but even better for us.

“It is very, very good for him and the fact he scored in the last minutes is important. For him to be so strong in the last round to be so cool in front of Fabianksi shows he is in the right way.

“For us it was no panic. For us the main thing was a good reaction to the surgery. When the reaction from the surgery is good everything will come and he will score goals from us.”