Home F365 Says Spurs are a mid-table mess; is this really a Jose job? 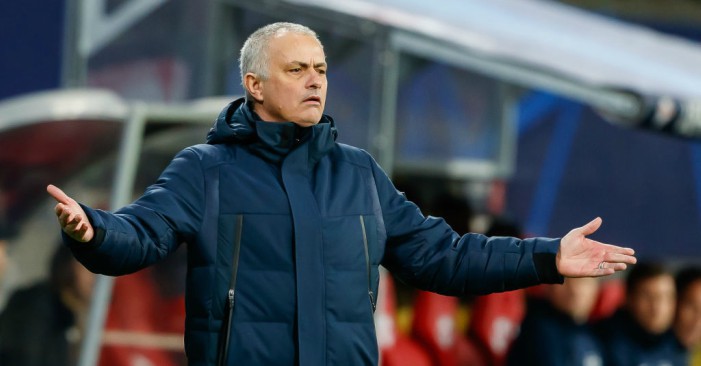 To those who say that we cannot truly judge so-called super-coaches like Pep Guardiola, Jurgen Klopp or Jose Mourinho until they have taken over and managed a mid-table club to unexpected glory, we bring you the experiment of Mourinho at Tottenham, a team flattered by their eighth place in the Premier League and now ejected from the Champions League with barely a whimper. There is not a single Spurs fan happy with their role as guinea pigs.

Make no mistake, this Tottenham side does not belong among the elite. Years of under-investment bordering on negligence and a lurch between philosophies has left a befuddled team that lacks identity and direction. That they have failed to win any of their last six games is no surprise. That they have logged another season without silverware should shock nobody. That they are fully 20 points behind their total from the same stage last season is a fact that should elicit no more than a shrug. There is little in this Tottenham side to suggest that they are in a false position.

Injuries offer some mitigation – and it has to be underlined that the rot had set in under the previous manager despite a banterous passage to a Champions League final – but they looked sluggish and ill-organised in Leipzig, and the buck for that has to stop with Mourinho. There are plausible excuses for a lack of cutting edge, but there are none for yawning gaps between players, an apparent absence of confidence and a lack of any discernible plan. If it was ugly on Saturday night, it was uglier on Tuesday. Hugo Lloris will play the role of bouc emissaire but Spurs always looked out of their depth in this tie.

Jose should be good value after this. “I’d like to say more but I can’t. I cannot give you names but the goalkeeper needs to show more.”

Barring the notable exceptions of Giovani Lo Celso and Dele Alli, nobody in a Spurs shirt looked like they had both the quality and the belief to turn around this tie. The more Peter Drury mentioned that comeback in Amsterdam, the less you believed it was possible. And not just because they now have a manager who has not won a Champions League knock-out tie in six years. There have been personnel changes – seven of the starters as well as the manager – but the immeasurables have shifted beyond comprehension.

This feels like the end of an unexpected golden (sans silver) era for Tottenham, with even Harry Kane lacking the appetite for a rebuild. Having been two or three signings away from being title challengers, they are now a mid-table side who cannot be surprised at being comprehensively outplayed by the third best team in Germany. They were never really a Champions League club – just a club that played in the Champions League – and it now seems likely that they will return from whence they came, taking the Big Six narrative with them.

So now for that experiment – a super-coach at a mid-table club. “I believe Spurs is not going to be my only club without silverware. I’ve won it at every club and I believe I am going to do it also with Tottenham,” said Mourinho this week. Right now he might be in a lonely club of one person who actually believes that. The rest of us cannot help but think that Spurs desperately need a re-build on a budget and they have picked pretty much the worst man for the job.