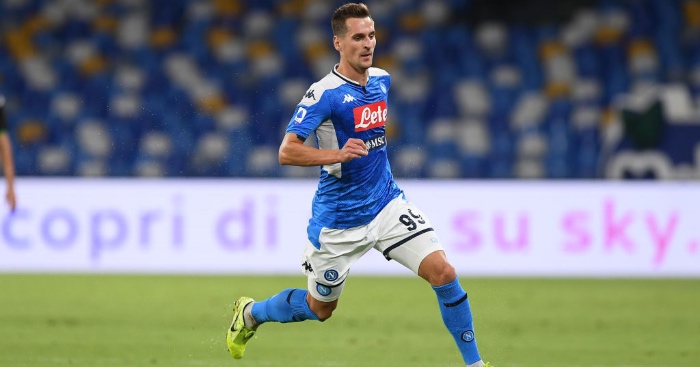 Spurs and Man Utd target Arkadiusz Milik has revealed that he wants to leave current club Napoli in search of a ‘new challenge’.

He has recently been linked with a move to either Man Utd or Spurs, with both sides aiming to improve their attacking options.

And now it looks like that could become a possibility, after Milik revealed he wants to leave the Italian side in the near future.

Speaking to Polish outlet Sportowe Fakty (via Goal), he said: “Napoli wanted to extend my contract for five years and gave me two choices: to sign or leave. I decided that I would like to try something else.

“The life of an athlete is beautiful but short. I am 26 years old, I want to grow, to be a better player.

“I think this is the right time to try a new challenge. There has never been hostility on my part towards Napoli. I wanted to solve everything professionally. I have great respect for the club, I spent four wonderful years in Naples. I respect Napoli, the fans. That’s what I decided. Right or wrong, but it’s my decision.

“I don’t want to name the teams that have contacted me, but the truth is that I had accepted some of the offers. But the teams in question never reached an agreement with Napoli and I had to stay.”

It looks like the Polish international could leave the club during one of the upcoming transfer windows, as long as Napoli agree a deal with another club.

Spurs were hunting Milik during the summer to provide backup for talisman Harry Kane. However, they ended up signing Carlos Vinicius on loan from Benfica instead.

Man Utd are also in the market for a striker to provide competition with Anthony Martial up front. Club legend Paul Scholes thinks Martial isn’t an actual striker, which is why they are struggling at the moment.