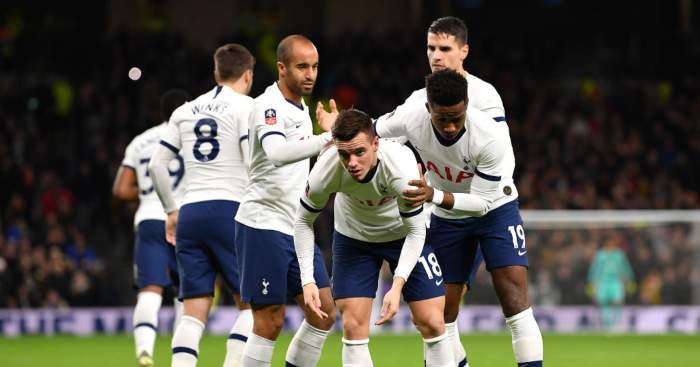 Jose Mourinho has his wish and Tottenham’s season is now over. Global pandemics permitting, they’ve got the formalities of some unimportant Premier League games to get through, but it’s basically all eyes on next season. But who should Spurs build their team around, and do we really have to try and come up with five? Yes, apparently.

Giovani Lo Celso
There’s a tinge of the bittersweet to Lo Celso at Spurs. He really is a properly excellent footballer, combining elements of all the club’s best midfielders of the last decade: Modric’s vision; Eriksen’s creativity; Dembele’s drive. He looks good enough to have made a real difference even when Spurs were actually good. Possibly the difference. Then there’s the fact that his injuries meant Mauricio Pochettino, having waited so, so long for the reinforcements he so desperately needed, never really got the chance to use the best of them.

But let’s put that to one side for a moment. There are enough reasons for bleak maudlin despair at Spurs right now; let’s not also go out of our way to tarnish the one unalloyed bright spot from this damaging waste of a season. Lo Celso may have gone from potentially being one really useful cog in a functioning machine to being the entire machine itself, but if Spurs are going to get anywhere close to once again putting pressure on at the very summit of the game then Lo Celso will be at the heart of it. If Spurs fans can take nothing else from this season – and they can’t – then they really must cling to the fact Lo Celso made his loan move permanent. Just imagine if he was clearing off at the end of the season. Good grief.

Harry Kane
Shades of Ledley King here. Is he quite as good as he was or could have been without injuries? No. Is he still utterly brilliant? Yes. Is he too good for Spurs? Yes. Is he, through a combination of a six-year contract and Daniel Levy and injury strife nevertheless sort of stuck there for at least another year? Also yes. Full season and 30 goals next year please, Harry. Thanking you.

Dele Alli
Showing slightly less fatigue than some of his team-mates, having cleverly split playing time with his twin brother. Has tailed off since dazzling form in those happy, carefree early weeks of smiling Jose Mourinho’s reign way, way back two or three months ago but still an immense talent and as one of vanishingly few Spurs players to have improved since Mourinho came in, he is surely a key part of… whatever happens next.

FEATURE: Five players for Tottenham and (maybe) Mourinho to discard

Japhet Tanganga
The focus may be on the striker injuries Jose doesn’t like to talk about or the lazy record signing Jose doesn’t like to name, but that’s really all just deflection from the most alarming aspect of Mourinho’s early months: Spurs’ utterly shambolic defence. Surely, surely, a full pre-season allows Mourinho at the very, very least to address that. If he doesn’t, then he and Spurs really are finished.

Right now, their defence is a shambles, both collectively and individually. The decline of Toby Alderweireld and especially Jan Vertonghen is both disconcerting and distressing. Neither is really that old for a centre-back, and both have been among the division’s very, very best of recent years. The lack of progress made by Juan Foyth and Davinson Sanchez – which it must be noted was already becoming a problem under Mauricio Pochettino – is another major headache for Mourinho. On the balance of probabilities, Tanganga is more likely to go the way of that pair than the formerly brilliant Belgians but on the early evidence he could be something pretty special. Spurs desperately need him to be.

Son Heung-min
A couple of years ago Spurs really were probably one or two players away from really cracking it. Now, Son is perhaps now one of only three truly elite players at the club along with Kane and Lo Celso. That Spurs have been able to ride out Kane’s injuries in recent years and have struggled to do so this season has been largely down to the presence, and then absence, of Son.

A clever, versatile and incisive forward who is surprisingly strong and adept with both feet. Scoring two goals – including an injury-time winner – in a game where he broke his arm in the first minute is quite something. We may, though, have to accept the mounting evidence that despite the smiles and the fun handshakes and so forth that he actually very much is That Kind Of Player. Loves a red card, does Sonny.