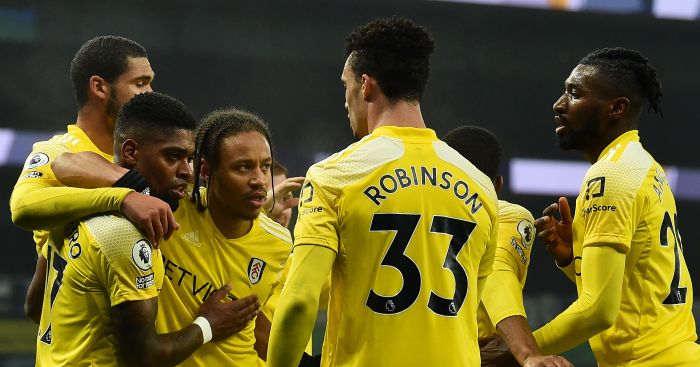 For the 10th time this season, Spurs led a Premier League game at half-time. For the fifth time this season, they end up sharing the spoils after another disastrous second-half performance in which inexplicable tactics are deployed ineptly. You can read our thoughts on Spurs’ continued insistence on doing this here and also here if you absolutely must. Everything applies again and we’re thoroughly sick of repeating ourselves even if Spurs aren’t.

As concerning as the uncanny predictability of these results has become, though, must be the identity of the teams pegging Spurs back. Newcastle. West Ham. Crystal Palace. Wolves. Fulham. This is not elite clubs forcing Spurs on to the back foot, it is Spurs constantly ceding territory and possession in the seemingly heartfelt yet baffling and wrong belief that this time things will be different. It’s very on brand for the era, is perhaps the kindest thing to be said about it. Mourinho stuck to his script as well, insisting that this latest draw, like all the others, was the fault of individual errors. Never does he seem to consider one of the individual errors here might be his own, or that a change of tactics might help mitigate the damaging significance of these individual errors that appear to keep on happening.

Not for the first time, or second, or third, we saw what happens when Spurs insist on playing to their weaknesses rather than their strengths. An opponent given encouragement and renewed confidence. Fulham accepted the gift with even more hand-rubbing glee and elan than most, and it was in the time after the equaliser that the extent of their improvement was clear. While the Newcastle and West Ham equalisers came too late for any response, Spurs did go again after conceding at Palace and Wolves. Those spells of renewed intent and ambition were in many ways the most infuriating, a reminder of how this team can play when allowed to, and confirmation that these tactics are not the way for any side with Harry Kane at one end of the pitch and Davinson Sanchez at the other to behave.

Tonight, though, Fulham didn’t settle for a point. Despite Sergio Reguilon being denied a winner by the offside flag it was Fulham who continued to do most of pressing in the final 15 minutes of the second half just as they had in the first 30. At no point after the equaliser did they look anything other than the likelier winner. By the final whistle, you could make a decent case they deserved all three points rather than the one they left with.

That Tottenham are complicit in their own downfall in these games is, clearly, undeniable. When the same thing is happening so often against so many different sides, there’s no point pretending otherwise. Fulham, though, were truly excellent in the second half having been perfectly decent in the first.

How much of their confidence was down to knowing what Tottenham might do and how much was down to their own fighting qualities – this was a fifth straight draw and they’ve now taken eight points from their last seven games, which have included trips to Leicester, Man City and Tottenham as well as hosting Liverpool – is hard to say. A little from Column A, a little from Column B. Either way, from the rabble that started the season, this undoubtedly now looks a Fulham side capable of surviving. At the very least, they’ll go down swinging.

Scott Parker channelled his understandable if slightly perspective-lacking frustration about the circumstances of this fixture into coaxing a fine performance from his team from front to back. His substitutions in the second half were all spot on, especially the game-breaking introduction of Ademola Lookman. He tormented Spurs’ retreating defence from the moment he came on. The tenacity to create a crossing chance and quality of the subsequent delivery for the equaliser were out of the top drawer, as was Ivan Cavaliero’s header. Aboubakar Kamara also made his presence felt as Fulham sensed the mood of the night and pushed for a winner; had he got his head up in the 89th minute and played in a clean through and entirely free Lookman it might well have been an even better night for Fulham.

But having been handed the fixture at 48 hours’ notice on the back of a concerted FA Cup effort, this will very much do for Parker and his team. The Cottagers end the night still in the dropzone but now just two points behind Brighton, who should be worried despite their own encouraging display – albeit for no tangible reward – at City earlier in the night.

For Spurs, nothing to take away but frustration. Again. At least they have an instant chance to put things right, mind. They face Sheffield United at the weekend. The Blades are still bottom of the league, but definitely playing slightly better recently and with their first win of the campaign under their belts. Who on earth could possibly predict what might happen there?