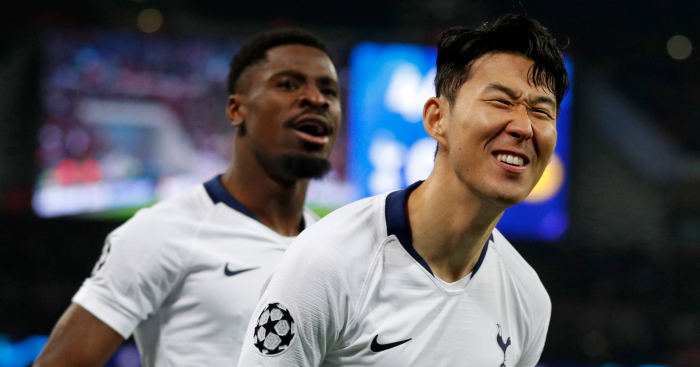 Tottenham were the rabbit, Juventus flashed the headlights and the Champions League knockout stages felt like the longest and loneliest of roads. Ben Davies tripped Fernando Bernadeschi, Gonzalo Higuain netted the subsequent penalty and the visitors were two goals down within nine minutes.

The response was emphatic, Harry Kane halving the deficit in the first half before Christian Eriksen erased it completely in the second.

“Everyone has grown up,” said the Dane after a 2-2 comeback draw with Juventus in Turin that made a mockery of the carefully cultivated caricature of a weak and wispy Tottenham. “We are more mature,” was Mauricio Pochettino’s post-match declaration.

The second leg betrayed the words of both manager and player. Tottenham led 1-0 at home after 63 minutes yet still somehow contrived to lose, with Giorgio Chiellini pouring salt into the open wound.

It was not Tottenham’s finest hour. But exactly a year after that first leg against Juventus in last season’s Champions League, Pochettino’s side offered irrefutable proof that they have actually grown up.

If recovering from self-inflicted gunshot wounds to the feet to draw 2-2 was once a sign of maturity, sauntering past the Bundesliga leaders with a calm, controlled and assured 3-0 win is an entire cheese room.

The only thing the hosts had to come back from against Dortmund on Wednesday was a handful of first-half mistakes. Neither side did enough to lead, albeit with the visitors having the better chances. Christian Pulisic and the pineapple-pushing, tree-shaking Dan-Axel Zagadou tested Hugo Lloris, while Jadon Sancho really ought to have scored.

Pochettino stood firm, refusing to waver. Tottenham reemerged for the second half with only one change, but not to either tactics or personnel; it was a shift in mentality that was required. And within 70 seconds they were rewarded with Heung-min Son’s delightful opener.

The cross was as sublime as the finish. Jan Vertonghen was a controversial choice at left wing-back as one of four natural centre-halves in the starting line-up, but the call was a masterstroke. After the assist came a brilliantly taken goal of his own to make it 2-0.

As Fernando Llorente headed in the third, each of Pochettino’s decisions had been vindicated. Juan Foyth had one early moment of madness in a sea of serenity, Harry Winks and Moussa Sissoko controlled the midfield, Son and Lucas Moura were constant threats and even the manager’s much-derided substitutions were faultless.

Even when Dortmund threatened, Tottenham had courage in their convictions. They maintained a defence as high as the referee’s hairline to incessantly press the visitors in possession, even with the dual threat of Sancho and Pulisic looming on either wing. Vertonghen initially struggled with the former, but had long silenced him come the final whistle.

Tottenham finally learned how to use their increasing experience on this stage. Their starting line-up had made 283 combined Champions League appearances before the game, compared to Dortmund’s 226. Pochettino had managed 20 games in this competition, with Lucien Favre overseeing only his seventh.

There were no excuses. They were the veterans whose injury problems were matched by a Dortmund side without Marco Reus, Paco Alcacer, Manuel Akanji, Julian Weigl and Lukasz Piszczek, and whose lack of investment was echoed by a Dortmund side whose net spend over the past ten years is negligible.

Yet they embraced the tie, grew into it and made quite the statement. Harry Kane’s absence was far from cataclysmic, and Dele Alli’s injury was certainly not calamitous. Tottenham are obviously a better side with two of their better players, but they are no longer so dependent on those comfort blankets.

Nor do they have to pretend that shitting the bed and managing to change the sheets before everyone notices, as they did against Juventus 12 months ago, is a sign of greater maturity. Tottenham came of age by almost sleepwalking straight past another European giant in Dortmund.

They had never previously won a Champions League knockout game at home – some would argue they still haven’t – but this is no longer a side concentrating on its forgettable past; the future is potentially too memorable for that.