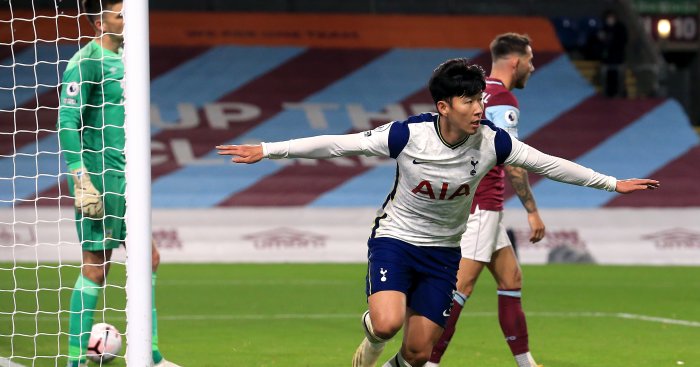 It might not have been anything like as much fun as the very silly, very 2020 results at Southampton and Manchester United, but Tottenham’s ferociously hard-won and powerfully undeserved 1-0 victory at Burnley may prove the most important of the three.

The minimum requirement for a team with Tottenham’s ambitions after that West Ham game was victory. But this was the most perfect victory possible.

Another five- or six-goal romp would have told us nothing and meant relatively little. We know they can do that. They’ve done it before and they’ll do it again. A pilfered 1-0 in a game where they managed one touch – that’s touch, not shot – in the opposition box during the first hour is far more significant.

It’s no dig at Jose Mourinho to say this is exactly what he would’ve wanted, as well as precisely the game he expected. The team sheet showed as much, with Matt Doherty and Ben Davies in the full-back positions ahead of the more flamboyant if unpredictable talents of Serge Aurier and Sergio Reguilon, as well as Eric Dier alongside the old warrior Toby Alderweireld who was exemplary despite taking a crafty elbow to the face from Ashley Barnes. A first Premier League clean sheet of the season at long last is huge, but psychologically there is a real sense that at least two of the four points Spurs have given away so carelessly have been won back tonight. It could mean everything.

Another Harry Kane assist for Heung-Min Son was a reminder that even at their least effective – and Spurs in general had certainly been that, stifled, stymied and frustrated by a textbook Sean Dyche performance – they will always carry a threat.

It wasn’t their usual evening and this wasn’t their usual combination. Rather than a sweeping, pin-point Kane pass for Son to run and finish, it was a flick on from an Erik Lamela corner and close-range headed finish. It was also, in the 76th minute, Tottenham’s first attempt on target. Everything about that will infuriate Dyche, but it also moves Kane and Son to 29 goal combinations with nine of them in the last six games. Only Didier Drogba and Frank Lampard have more in the Premier League, and at present speed and course their total of 36 will be overhauled well before the year is out.

Kane’s latest assist came three minutes after he prevented a certain Burnley goal with a headed clearance off his own goalline. It was another quick-fire reminder of just how good and just how important a footballer he is.

The ‘one-season wonder’ tag now seems less ridiculous than the ‘selfish penalty tap-in merchant’ one. When the boffins have knocked the Covid on the head and they and we are finally able to turn attention back to cloning footballers, you’d soon find yourself wondering just how many Kanes you would have in this Spurs team if you’d recklessly decided to play God in such a cavalier way. It’s at least five, I reckon. The striker. The No 10. The deep-lying creator. The right-back swinging crosses in. The centre-back dealing with everything. The maddest thing of all is that you’d probably only actually need two or three Kanes to do all those jobs anyway. He is extraordinary and, with due respect to your James Rodriguezes and your Patrick Bamfords and the Dominic Calvert-Lewins of this world, is currently the standout player in the league by a quite startling margin. He is doing everything and doing it expertly. Despite what happened last time, he could probably now do a decent job in nets.

For Burnley, though, this was a real kick in the teeth. They utterly nullified Spurs for 75 minutes. That Tarkowski header cut out by one of the many, many Kanes was far from the only opening the Clarets had created, and they looked the likelier winners right up until they didn’t.

But when the frustration fades, there are now far more reasons for optimism than at any other time this season. Burnley have not looked themselves, but tonight they absolutely did. Ashley Barnes and Chris Wood looked as horrible to play against as ever, the commitment to the cause absolute all over the pitch and a performance that more often than not would deliver at least a point against high-quality opposition. One point from five games is sub-optimal, but this should be a corner turned.

Tottenham, though; what can they do this season? Kane spoke post-match on Sky about “something special” and, as Gary Neville noted, “He’s not talking about the Carabao.” You really do wonder. They are up to fifth and just two points from the top of the league. They’ve scored more goals than anyone else and, despite their assorted injury-time woes, only two teams have conceded fewer. And we still haven’t really seen anything yet of Gareth Bale.

Tottenham’s two games before the international break are against Brighton and West Brom, and their goal difference is obviously pretty handy. Bloody hell.