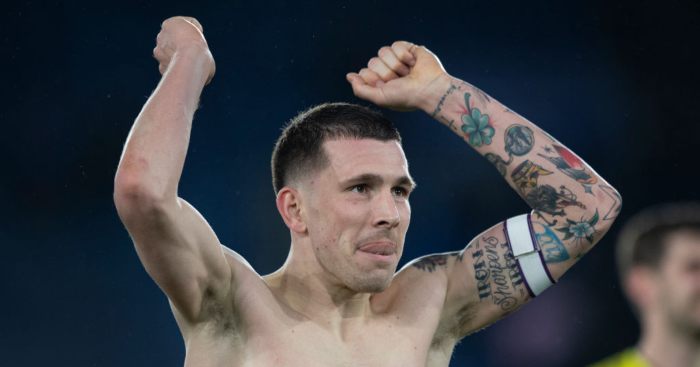 Tottenham have signed midfielder Pierre-Emile Hojbjerg on a five-year deal from Southampton.

The 25-year-old has joined for an undisclosed fee, thought to be an initial £20million plus add-ons, having signalled his desire to work under Jose Mourinho, and become’s the club’s first summer signing.

A separate £12million deal for Spurs right-back Kyle Walker-Peters, who spent the second half of last season on loan at St Mary’s, to join the Saints has also been concluded.

Hojbjerg was stripped of the captaincy at the south coast club after he informed them he would not be signing a new contract and spent much of the resumption of the 2019-20 campaign out of the side.

There was interest from Everton, but the midfielder was keen to work with Mourinho at Spurs, who have got the deal done in an uncharacteristically swift manner.

Hojbjerg told Spurs TV: “What was very important for me was I wanted to play at a club where I could see myself for many years and Tottenham was the one.

“I am very proud, very happy and excited. I think there is a fantastic future ahead for the club and I wanted so much to be a part of that.

“If you want to achieve the big things, you need 11 leaders on the pitch and to do that everyone needs to take responsibility in their position, bringing everything they have into the team. I always like to say whatever you put in, you get out.

“One of the first things I said, especially to my wife, was one day when the fans are allowed back in, I am to be the first one in that stadium because it is unreal. It is really one of the best, maybe the best.”

🗣️ @hojbjerg23 has a message for you…#HøjbjergIsHere ⚪️ #COYS pic.twitter.com/iToUrR9lzH

Hojbjerg arrived in England in 2016 from Bayern Munich, where he also worked under Pep Guardiola and impressed at St Mary’s, soon taking on the armband.

But with his contract running out next summer, he informed the club that he would not be renewing terms and Southampton have now cashed in.

Hojbjerg has been intent on joining Spurs, liking several social media posts linking him with the club.

Walker-Peters’ move is a separate transaction as Saints make his loan into a permanent transfer.

The right-back, who helped England to glory in the 2017 Under-20s World Cup, spent the second half of last season on loan with Ralph Hasenhuttl’s men and impressed, prompting Southampton to pay a reported £12million for his services.

Walker-Peters has penned a five-year contract on the south coast, ending a lengthy stay with Spurs, who he joined as a youngster.

But with Kyle Walker, Kieran Trippier and Serge Aurier in front of him in the queue, the defender struggled for game time, making only 24 appearances.

Walker-Peters said: “I’m delighted to have signed here. The last few months on loan have been great for me and a lot of fun too. I’ve really enjoyed my football, the atmosphere here and also the style of play.

“The club definitely fits the way I like to play, and I hope that people were able to see that during the last month or so of the season.

“I feel like I’ve already developed in the time I’ve been here, and that’s a big part of wanting to stay too. Obviously, it’s a club with a great reputation for improving young players and, personally, I’ve found it really valuable working under the manager, with his ideas on the game and what he expects from you as an individual.”