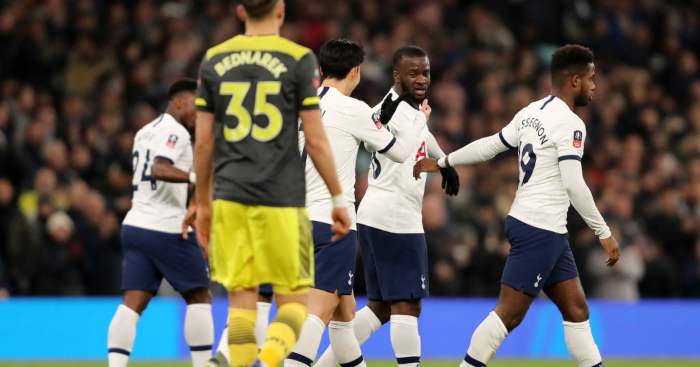 Tottenham players are unhappy that Jose Mourinho decided to publicly criticise Tanguy Ndombele, according to reports.

The midfielder signed from Lyon in the summer for a reported €62m but has only managed to play 90 minutes on five occasions for Spurs this season.

Ndombele looked sharp in a 20-minute cameo – setting up Heung-min Son’s goal – in Sunday’s 2-0 win over Manchester City, his first appearance since hobbling off with a hip injury at St. Mary’s on New Year’s Day.

And the Frenchman started in Spurs’ 3-2 victory over Southampton in the FA Cup fourth round replay on Wednesday night, creating the opening goal when his shot got a big deflection off Jack Stephens and flew into the net.

He would only last 61 minutes though as he was replaced by Dele Alli with Tottenham level at 1-1 at that point.

FEATURE: If Chelsea are top four ‘underdogs’, does that make Spurs favourites?

Mourinho said on Tuesday that Ndombele needed to step up and that he was still not ready to play 90 minutes for Tottenham after recovering from injury.

The Tottenham boss has also said in the past that Ndombele is “always injured” and after he missed Spurs’ 2-1 win over Brighton earlier in the season that “he was not injured but not feeling in a condition to play.”

And now The Athletic say that the public calling out ‘did not go down well’ with some of Mourinho’s Tottenham squad.

The report added: ‘Those uncomfortable about it felt that Mourinho would have been better off dealing with the issue privately and that it should have been more of a discussion between the head coach and the club’s medical staff.’

How to get the best out of Ndombele remains ‘as much of a conundrum within the club as it is on social media’.