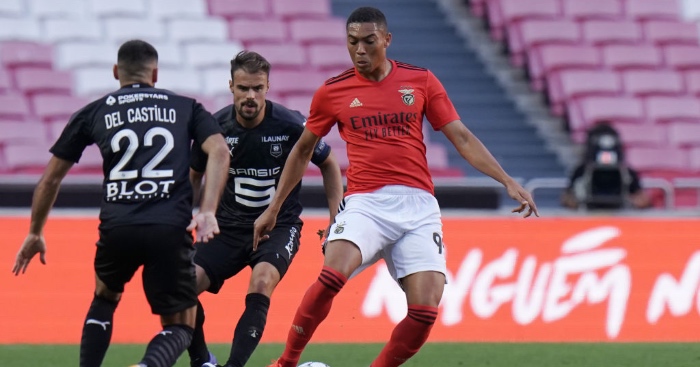 New Spurs signing Carlos Vinicius has been tipped to succeed at the club by his former manager at Rio Ave, Jose Gomes.

The 25-year-old joined from Benfica on a season-long loan deal to provide talisman Harry Kane with support up front.

He scored 18 goals and assisted five more in 32 league appearances in the Portuguese league last season.

And now his former manager has revealed what he thinks will trouble Premier League centre backs this campaign.

He told The Athletic (via Goal): “He’s a powerful player, and very intelligent. He is someone who always gets himself into goalscoring positions.

“He has a great sense for where opportunities are going to appear. He shoots with enormous power with his left foot. He protects the ball really well – even when defenders are pressuring him, he is able to shield the ball and turn his man to get a shot in.

“I used him as a No.9, a penalty-box striker. But we looked to make the most of his mobility. He likes to make diagonal runs into wide areas, behind the full-backs.

“He’s someone who holds the ball up well, which allows the rest of the team to move up the pitch and start an attack, or just take a breath. He was our reference point in attacking transitions.”

“It’s a good move for Vinicius and for Tottenham. This is a win-win for both parties.”

The move will give Vinicius the opportunity to test his ability in the Prem, while it will also give Spurs a backup option for Kane.

Spurs were linked with Moussa Dembele from Lyon originally, but the move failed to materialise as the French club wanted a loan deal rather than a permanent one.

The North London club eventually moved for the Brazilian as an alternative. He’s signed for an initial three €3 million loan fee with the option to buy for €45 million at the end of the season.