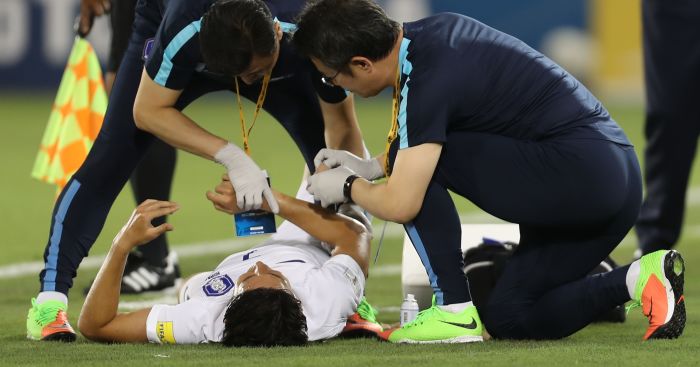 Son was substituted in the 34th minute in Doha after landing awkwardly following an aerial challenge with Qatar’s Mohammed Musa.

The 24-year-old was left clutching his lower right forearm and looked in serious pain as he was then escorted off the pitch.

Tottenham are yet to learn the full extent of Son’s injury from South Korea’s medical staff but he is unlikely to be available for the start of Mauricio Pochettino’s pre-season on July 3.

Son was due to be given extra time off anyway given his involvement in international fixtures but would have been expected to join up in time for the club’s 10-day tour of America at the end of next month.

Any sustained absence will come as a blow to both club and country after Son scored 21 goals for Spurs last season.

He also has 17 in 54 matches for South Korea, who face a scrap to qualify automatically from Group A for the World Cup next year.

They sit second but only one point ahead of Uzbekistan in third, with a crunch match at home to front-runners Iran up next on August 30.

Finishing third would only be enough to secure a spot in the play-offs.