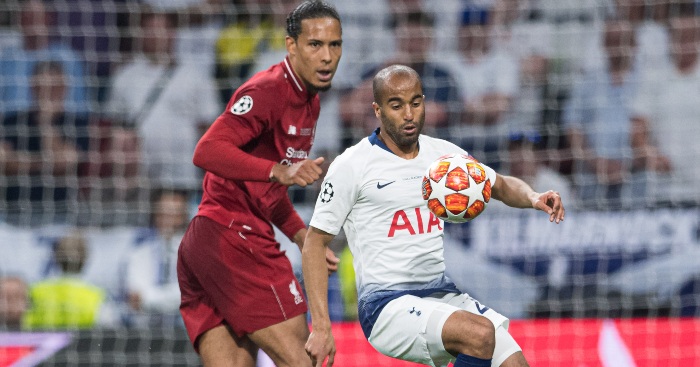 Lucas Moura does not rate Virgil van Dijk as the best defender in the world and the Tottenham forward has cast doubt over a one of the Liverpool star’s statistics.

In an interview with Brazilian Youtube channel Desimpedidos (translated by the good people at Sport Witness) the Tottenham star was asked about a range of things, including the Champions League final defeat to Liverpool.

More specifically the Brazilian was asked about Liverpool centre-back Van Dijk, who has been labelled the best defender in the world.

0 – No opposition player has completed a dribble past Virgil van Dijk in any of his 36 PL apps this season. In fact, this run stretches back to last March, meaning he hasn’t been dribbled past by an opponent in any of his last 45 PL apps. Immovable. #PFAAwards #POTY pic.twitter.com/Y8BIsle0vq

Opta claim the Liverpool centre-back has not been dribbled past in his last 64 appearances in all competitions for Liverpool – a fact Moura has contested.

“Hey, the guy’s good. He’s two metres tall, strong, and the Liverpool team is a very good fit, with a lot of chemistry. So he had an excellent season. He was elected the best in the Premier League, I think,” said Moura.

But when talking about the dribbling stats, Moura said: “Dude, now this question there I don’t know if it’s true. They say he hasn’t been dribbled past since… whatever. If the guy is past him, it’s already a dribble.”

Moura was also asked if Van Djik is the best defender in the world: “In the world… there are a lot of people there. But for the season, I think he’s among the three. Among the three!”

Moura was asked about losing the Champions League final and being left out of the starting XI by Mauricio Pochettino.

“Of course I got upset,” Moura said. “I wish I had started playing. But I got so much more upset that we lost. We believed very much that we were able to be champions. And man, it was difficult. I cried a lot after the game. Because it was so close, so close.

“But what if I had started playing? We can’t tell whether we would have won or not, what would have happened. This is difficult to answer. Manager’s mind, no one can understand. We must respect, accept.”