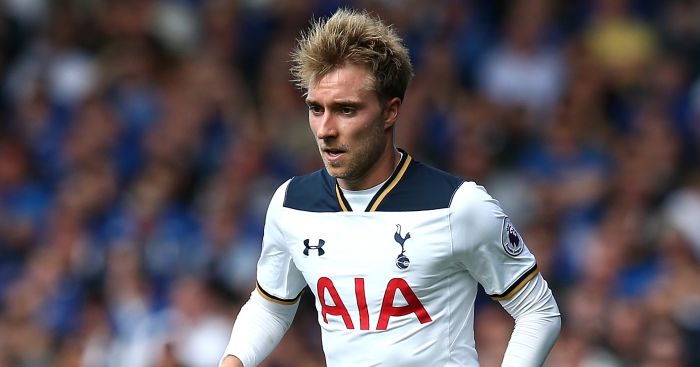 Tottenham midfielder Christian Eriksen appeared to dismiss talk he has demanded £150,000-a-week wages as he took to Twitter after Saturday’s 1-1 draw at Everton.

Reports have suggested Eriksen’s agent left Spurs stunned by requesting the huge pay rise for the 24-year-old amid ongoing talks over a new contract and interest from the likes of Juventus.

But following the Premier League opening-day match at Goodison Park, for which Eriksen played the full duration, he posted a message on Twitter which said: “Not the result we wanted! But still one point and great support from the fans.

“And don’t believe everyting u (sic) read on the internet.”

Not the result we wanted! But still one point and great support from the fans?
And dont believe everyting u read on the internet ??#coys

Additionally, the Evening Standard has quoted Eriksen’s representative Martin Schoots as saying the Denmark international, who joined Tottenham from Ajax in 2013, is “happy” at the north London club and not simply motivated by money.

Schoots said: “The only thing that I can say is that if money were the most important thing, Christian would not have gone to Ajax in the first place.

“At the time, he was 16 and we were in contact with clubs like Barcelona, Chelsea and AC Milan.

“And if money were the most important thing, he wouldn’t have joined Tottenham three years ago. He had interest from some of the richest clubs in the world.

“But Tottenham were the only club he wanted to join, and he is happy.

“In the eight-and-a-half years that I have worked with Chris, we never made any comments on contract negotiations and we will not make any exception on this, not even confronted by some funny internet rumours.”