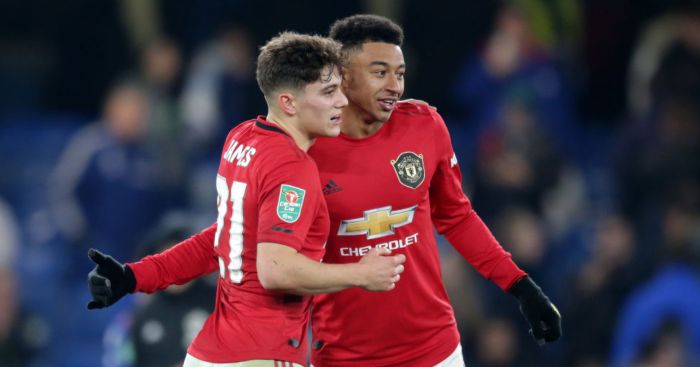 Three things are certain in life: death, taxes and the fact that each and every person reading this – hell, even the writer who once broke his arm saving a shot on the halfway line during a game of five-a-side and opted to go in net to aid his recovery – has scored or assisted as many Premier League goals in 2019 as Jesse Lingard.

Victor Wanyama. Juninho Bacuna. Floyd Ayite. Phil Jagielka. Each have scored at least once in the top flight this calendar year. Aaron Ramsdale assisted more league goals from between Bournemouth’s posts last month than Lingard has in the previous ten. Victor Lindelof leads his teammate on both counts since January.

It might seem an unnecessary time to highlight it. Curmudgeonly, even. A third successive away win in all competitions, a measured performance and impressive result against a confident, dangerous side and advancement to a quarter-final deserves credit.

And Manchester United should receive it. Ole Gunnar Solskjaer was justified both in starting with a three-man defence then switching it upon Lindelof’s injury. His substitutions were also excellent. The formational change might have been a little delayed but Marcus Rashford ensured it could never be described as too late. His final day as a 21-year-old was spent first defying his critics then modifying gravity to his will. Daniel James and Scott McTominay’s fine work did not go to waste; Harry Maguire and Marcos Rojo’s fallibility will be forgotten.

But Lingard’s will not. Lingard’s cannot. Lingard’s should not. This was yet another ineffective, non-existent display from a player who seemingly embodies what his manager wants, but is only getting in The Man United Way.

His strengths are in his movement off the ball, yet his weaknesses lie in his lack of ability on it. He is a creator of space but not chances. He was substituted in the 66th minute with no key passes, saw replacement Andreas Pereira make one within his first five minutes, and must have surely realised that his latest opportunity to impress had been miserably wasted.

There is sympathy. This was only his second start of October and rhythm is important. In an unfamiliar system, a lack of sharpness can be ruinous. Yet this is elite-level sport, and those are weak excuses for almost an hour of football with no redeemable feature or memorable highlight.

Not long ago, that might still have been enough. But United, even in this humble, introspective state, have outgrown a player who matches their requirements on reputation alone. Lingard’s past is not irrelevant, nor is it reason alone for him to keep his place. He is the anti-Allardici: a foreign player in his position would not have been granted nearly the same level of patience.

Rashford and McTominay remove the need to hand token roles out to academy graduates, while both also bringing something genuinely unique in terms of quality. James and Anthony Martial are the exciting throwbacks. The defence, while schooled by Michy Batshuayi on Wednesday, provide a solid base. Even Pereira offers a vague idea of threat and danger. With Juan Mata and his band of merry youngsters diligently waiting for their chance, a place for Lingard feels more than ever like a waste.