Home Mailbox ‘Sterling got off lightly’ and other Mailbox opinions… 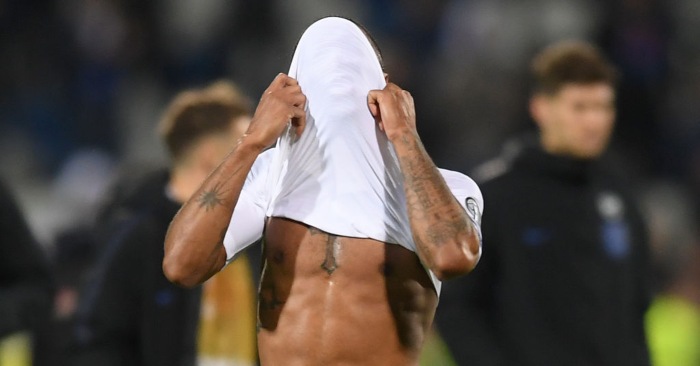 Well that was a pathetic haul of mails. And nothing really about England. Maybe read our ratings or Johnny on England and then get in touch at theeditor@football365.com

Football and politics cannot be separated
The match is Pristina reminded me that playing football is an intensely political act. The people who say sport and politics should never mix are not so much wrong as flat-earthers. They are denying what is.

Last night was an act of political expression of Kosovars saying who they are and who their friends are. No wonder they were so desperate to have a national football team and their larger neighbours were so desperate for them not to have one.

We saw it at the World Cup, with Shaqiri and Xhaka professing loyalties towards both Switzerland and Kosovo that were deep and profound – and dual. They aren’t going to choose between the two. Last night, the Kosovars showed what the Brits could be like – on one of our good days. I just wonder whether this, coming in the middle of a General Election, will be something that is noticed back here as well as over there.
Mark Meadowcroft

Sterling got off lightly
Could someone please let Levenshulme Blue Manchester 19 know that Sterling getting booed for a bad team performance and then Gomez getting booed for being attacked by Sterling is not hypocritical. The situations would have to be similar or identical for that comparison to hold water, which they certainly weren’t. Sterling may not have deserved being booed for a bad team performance (I can’t remember and not being a dirty pom, couldn’t care less) but Gomez was beyond blameless for the situation.

Sterling got off lightly for gathering splinters for a game as far as I’m concerned. If it was a fringe player instead of your best player (debateable), I wonder if the penalty would have been more harsh?
Ben, LFC, Down under

Bloody Hell Hakim,
Aren’t Man U experiments ruining them enough without spreading it to England as well.
Ryan, Liverpool

Let’s stop talking about price tags
A random thought but how about F365 (including the mailbox) takes the first step and avoid mentioning any transfer fee after a transfer has been done?

Easy to cry about how everyone beats footballers with the transfer fee stick but ending up somewhat doing the same.

We can talk the talk, let’s see if we can walk the walk.
Anon

Why I support Manchester United
I read the emails from last week on why we support the teams we do and decided to also dive right in. So I’m a Man Utd fan who lives in Accra, Ghana. I’ve never been to Manchester, heck I’ve never even been out of my country before (I believe ppl like me are usually called plastics). I can’t seem to remember when exactly I started supporting United, but I do believe that the David Beckham blue sharp sponsored jersey my uncle bought me in 2001 was the trigger for my love story with Man Utd (and England for that matter). Even then, I wasn’t actively watching football apart from a few Champions League games I managed to catch on tv. The first United game I watched live on tv was the one against FC Porto in 2004 that had Jose Mourinho sliding down the touchline.

Everything changed when I went to high school in the capital in 2005 though. I finally had access to BBC world service on radio and could listen to sports world for live commentary every weekend and I just got deeper and deeper into this Man United obsession. I was lucky to support Unted during the very successful Fergie years. The past few years have been pretty dire. I get angry, I get worked up, I get pi**ed off but I turn on my TV every single time to watch my beloved Man United just because I can’t help it. I don’t believe anyone who truly loves a team can just move on and support another. I think it’s more like a sacred pact, once you really start supporting a team, you are stuck for life. If you can just move on and support another, then maybe there was no connection in the first place. I have never been to OT, but boy when the floodlights are on especially during those Champions League nights, the goosebumps all over my skin tell me I love United just as much those lads from Manchester.

That’s why that game at PSG last year has a special place in my heart. It was my Nou Camp (1999). I’ve watched us win trophies and all, but that was the moment when I felt how it was like to move from despair and acceptance of defeat to excitement and joy in a matter of seconds. The impossible dream made possible. So I guess all I’m saying is that, once you choose a team, you just cant help but stick with them through the good and bad times. After all, isn’t that what love is about?
P Stik, Accra, Ghana ( This got longer than expected)

Go on the Gunners…
Well done Spurs for giving the North London derby the respect it deserves by hosting it at their brand new stadium.

Everyone was a winner this weekend due to that decision but mainly Arsenal mind – 2-0 at the lane – what a result!
Graham Simons, Gooner, Norf London

Good read, Seb. There’s a lot of Soccer AM Lite versions of football shows nowadays. Unfortunately, as we saw with BT Sport’s excellent insightful European stuff, the audience simply isn’t there. So we get the cheap, watered down ones on repeat. Like a TV version of Zoo magazine.

Obviously the FB role’s evolved over the last decade or so but there’s still a place for more defensive FBs depending on the context i.e. team/squad balance, team shape/tactics, opposition’s approach, etc. Anyway, Irwin was a 90s FB & attacked like mad! #mufc https://t.co/RXKLPwDCyQ

Right of a back 3 would be superb for all involved. Dalot/Laird would suit wing back roles much better with William’s the other side. https://t.co/KXacMo32wM