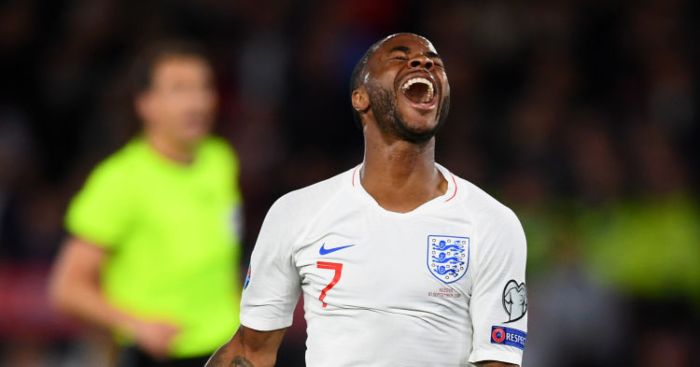 It’s international week, so send some mails to theeditor@football365.com. What else are you going to do? Aside from vote for us. Please.

Sterling should never play for England again
I know footballers do things on a pitch which we try to compare to life but it isn’t normal course of action to chase a guy down and try and do a lunging slide tackle in the street and we say he should be done for that, that is quite frankly a stupid comparison nobody does it.

But Sterling attacked a colleague in the canteen so nothing what so ever to do with football, think about this what would your employers, I know mine would sack me.

The FA should do the same he should never wear the shirt again.
Gary in Germany

Southgate right to act…
Just a quick note to add to the growing ‘Scratch-Gate Southgate’ pile. Sterling has quite rightly been praised for being a role model, for talking openly about racism and his problems — but it’s a two way street. He is a role model and the fact that as a (relatively) senior player he’s attacked a more junior player off the field, away from the ‘passion’ of the football field, means that he should have been sent home, no questions asked.

To re-iterate, this wasn’t an on field bust up, but a grown man waiting a whole day, after reportedly hugging Gomez at the end of the game, and then flying off the handle/grabbing him by the throat in the workplace.

It’s great that Gomez wants to put it behind them, that Sterling has apologised, but it can’t be brushed under the carpet.

Rio talks about educating Sterling about what he’s done wrong — I’d suggest not simply dismissing it as ‘one of those things’ but treating it as what it is, serious misconduct, would be a good start.
Dan, London

Is Gomez a saint?
The media has been painting Liverpool, Gomez and all its players to be some type of saint with Man City and Sterling, it’s leaders, the devil that goes around grabbing people’s necks, calling for the big man…

Yes Sterling was wrong in letting his emotions get the better of him. The rivalry should have ended on the pitch, but do we really believe Gomez did nothing to aggravate him?

We all saw Arnold give Sterling an unnecessary push during the match. We all saw Sterling’s reaction to it and Arnold’s apology. Who say Gomez didn’t do the same… Without the apology part.

I doubt Sterling would go around grabbing people’s necks without a reason (still not saying its right. I can clearly see you judging me).

I doubt Gomez is the saint everyone is painting him to be.
Nelson, Lagos, Nigeria

Given I believe Rio was still at West Ham when this (https://youtu.be/QJiaBqmy5jE) happened between John Harrison and Eyal Berkovic, I think that’s the one incident we can be sure Rio was right about!!!

Sure, the force wasn’t “thunderbarstard” levels, but Rio never indicated it was; just that contact between feet and head were made!
Paul (Spurs) T.Wells

What does rivalry look like in your country?
Greetings from Harare, Zimbabwe. It’s the International break, no games so l thought to give a a breakdown of football fans rivalries here in Zimbabwe. In England you have the Manchester Utd- Liverpool Rivalry, Arsenal – Tottenham rivalry etc and most of these are determined by the geographical location of said teams.

Well here it’s a little bit different. Manchester Utd has the biggest fan base. Followed closely by Chelsea aka Mabhinya. And the fans are always the loudest and most annoying. Then The Arsenal are next on the list with Liverpool just behind them though Liverpool is supported by the older generation. There’s only a handful of Man City fans and l only know of two Tottenham’s fans and one of them is a teenage girl who seems more interested in Harry Kane the Man rather than Harry Kane the footballer.

Taking this into account, it stands to reason that Man utd and Chelsea fans have the most intense rivalry bordering on insanity. You really should see the atmosphere in a bar when these two are going head to head.

It’s the international break people. Can anyone share what their fans rivalries look like in their respective countries. Please publish this letter. It’s my first and hopefully not my last. Cheers.
Tabonga Moyo, A private in the Ole Gunnar Solskjaer’s Army. Fifth Brigade Infantry Division lol.

P***ing on Chelsea chips
Chelsea (or as they’ve now become known ‘Frank Lampard’s Kids’) have been getting a lot of praise recently, and rightly so. They are a young team, playing better football than many Chelsea fans will ever have seen before. (How many Chelsea fans were there globally, pre-Mourinho, compared to now?)

There are however two very important factors, that I don’t think I’ve seen anyone discussing.

1. Chelsea spent the last three or four years buying every single talented young player in Europe, and then loaning them out. That means cheap transfer fees, and probably very little to even pay in wages. I’m sure I remember reading that Chelsea had in excess of 45 players out on loan just last year.

By scooping up all the emerging talent, they have ensured that they can pick those that have developed best, and put them straight into their team without paying big transfer fees and they will also probably be starting them on comparatively low wages. The fact that of that number only Abraham, Mount and Tomori have really broken through means they don’t even need a good hit rate, but who cares when you can buy 15 potential superstars for less than one Harry Maguire?!

This is, without question, an absolutely brilliant strategy. It’s morally dubious, and when other clubs or governing bodies figure it out it will doubtless be stopped either by a rule change or by increased competition from other teams, but why wouldn’t you take advantage if the rules allow you?

Based on current league positions their last six opponents sit in 12th, 18th, 10th, 13th, 19th, 11th (average position 13.8). By comparison they have taken 8 points from a possible 15 against top 10 sides, and that includes 3 against Crystal Palace (currently 10th).

For the record the average position of Liverpool’s last six opponents is 9.0, Leicester’s is 9.3, Man City’s is 12.5 (an average brought way down by playing Liverpool in 1st).

Of course these are still Premier League teams and Chelsea do deserve credit for racking up the wins.

Momentum in football is also massively important, and it might be that Chelsea have such confidence from their recent run that it will allow them to sustain their charge when they inevitably face better opposition, but Man Utd also went on an excellent run (against bottom-half teams) after the appointment of OGS last year only for it to start to fall apart the moment they faced a good team.

I guess my conclusions are:
a) It’s easy to “win it with the kids” if you buy ALL the kids
b) Maybe beat someone decent before giving Frank the knighthood?
Joe, LFC, Salisbury

When there’s precious little for us gooners to be happy about at the moment, that goal (however it went in) warmed the cockles.
Graham Simons, Gooner, Norf London

Irked by rugby types
Urgh, another holier than thou rugby arguement In the mailbox, possibly Monday, but as its international break I’ll get something off my chest – rugby does not have the moral high ground to football. Hopefully brief enough to be read.

1) Rugby fans don’t need segregation. Well no, but then neither do football fans. At the World Cup the spectators are 70% on a corporate, 20% on a lottery and the rest in fan groups. No segregation.

At rugby premier club level the average attendances are akin to somewhere between league one and two. And some non-league games. No segregation at non league games. There hasn’t been a systemic hooligan presence since before professional rugby was invented.

2) Diversity. Rugby is far behind football on its representation and football isn’t where it should be. The BBC did an article on people watching the rugby. They took a photo of a pub in London which was all white people. Do you know how hard it is to get a photo in London of all white people? Rugby is dominated by public schools boys which leads me to

3) Corruption. Turns out the Ferrari of rugby Saracens has been deemed to breaking the salary cap by implementing a series of legitimate business deals in addition. Tony Soprano would have been proud. Unclear if its paid through their dad’s offshore trust fund.

4) Louts. Okay, a crowd of footie lads in a pub or on a train may not be ideal but have you ever drunk with rugby lads? They are animals. Can you imagine if a football fans group had said well Japan had better make sure they had enough beer because we are gonna get f**ked up?

5) Quite frankly no one cares about rugby. Other than England being in a final on a morning when its competing with Saturday kitchen. No one is selling newspapers, tv subscriptions, gambling, computer games using rugby. It’s a minority sport. Can you imagine if Southgate lost to a country with the population of greater Manchester in new Zealand? It would be a national tragedy. With minority sports you can let them calmly come to right decision and learn from wrong ones. In football they are exposed.